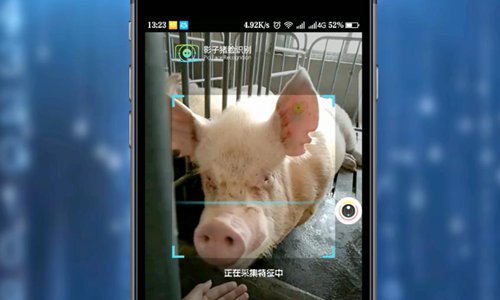 After scanning a pig's face with a mobile phone, its breed, age and diet information shows on the screen. (Photo/Courtesy of Yingzi Technology)

Swine farms across China may soon be empowered by new pig face recognition technology, allowing farmers to track, feed and manage their livestock.

Yingzi Technology, a Guangdong-based company, is using face recognition on pigs to track their growth, manage their health and increase their traceability as they move throughout the pork supply chain.

In addition, by using surveillance cameras, the company's pig face recognition technology is able to automatically identify each pig in a herd, track them on a daily basis, and remember how their facial appearances evolve as piglets grow into adults, according to Jackson He, CEO of Yingzi.

"Compared with existing ways to track pigs, such as radio-frequency identification (RFID) ear tags or bar codes, pig facial recognition does not require physical contact with the pigs and is easier to manage," He told the Global Times.

Before the technology was commercially launched this March, the company had collected data from real pig farms and went through a rigorous development process.

"The biggest difficulty is that pigs don't stand still in front of the camera like humans do. So apart from facial data, such as height of nose and distance between eyes and nose, the system also collects their body data," He said.

Currently, the technology is being used in a farm in Guangxi on a trial basis and has so far achieved a 99 percent accuracy rate.

Yingzi is one of a growing number of Chinese IT companies which is revolutionizing the pig breeding industry, hoping to boost its efficiency using artificial intelligence (AI), big data and genomics.

Last Tuesday, JDDigits, a subsidiary of Chinese e-commerce giant JD.com, announced that it will use AI, the Internet of Things and facial recognition technology to track the growth, vaccination and physical condition of pigs, according to the China News Agency. This February, Alibaba Cloud said it will cooperate with farming companies and raise 10 million pigs in two years using AI.

China produces nearly half of the world's pork, according to a report by the US Department of Agriculture. However, pork production is mostly carried out in backyard pens, and costs for raising pigs in China are among the world's highest. Pigs in China also lag behind Western countries in terms of growth rate and reproductive performance, according to the 2017 China Swine Industry Report. 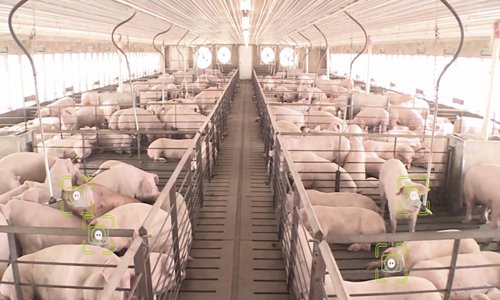 Pig face recognition technology can automatically identify each pig in a herd. (Photo/Courtesy of Yingzi Technology)

In recent years, China has been trying to upgrade its pig production from small-to-medium-backyard pens to large-scale pig farms in order to boost productivity and safety, Zhang Yuejing, an analyst at Beijing-based zhue.com.cn, a pork industry consultant, told the Global Times.

"The pig industry is very positive about cooperating with IT companies. Our industry is relatively traditional and outdated, but AI and IT algorithms will be able to upgrade the industry, pinpoint problems and solve them," Zhang said.

"It can also tackle food safety issues. IT technologies can monitor pig farm operation and spot violations in feeding. The pork produced is traceable and better in quality," she added.

He was an employee at Intel for 23 years before he co-founded Yingzi in 2017. "The agriculture industry in China is comparatively less digitized but is full of opportunities. We want to use technology to reform the traditional ways of production and boost productivity," he said.

Yingzi's pig face recognition, part of its Future Pig Farm system, will significantly decrease pig-rearing costs. JD.com says its technology can decrease costs by 30 to 50 percent, reduce the amount of fodder required by up to 10 percent, and shorten the breeding time by 5 to 8 days.