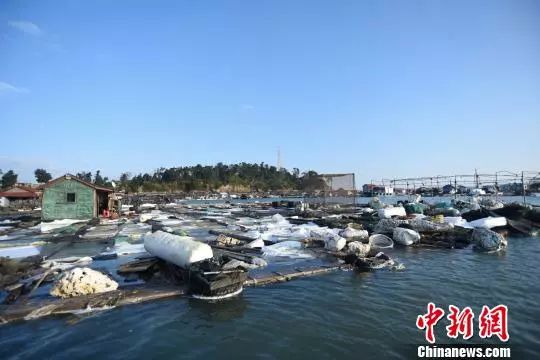 Early investigation results showed the accident, which leaked 6.97 tons of the chemical into the water, was caused by wear and tear of the hose. (Photo/China News Service)

More than 50 residents reported to hospitals in a district in Quanzhou, in East China's Fujian Province, after almost 7 metric tons of petrochemicals leaked on Sunday, the local government said in a statement on Thursday night.

The main symptoms the 52 patients complained about were dizziness, nausea, vomiting and sore throats. Ten patients required hospitalization, including one who fell into contaminated water and contracted a lung infection known as aspiration pneumonia. They are recovering quickly.

Quanzhou's city government said in the statement that it will continue to monitor levels of the leaked chemical in the air, water, and marine products from the area, evaluate economic losses, hold people accountable, and handle the incident in accordance with laws and regulations.

A hose from an oil tanker owned by Fujian Donggang Petrochemical Industry ruptured when it was offloading petrochemicals, mostly C9 aliphatic hydrocarbons, at a wharf in Quanzhou's Quangang district at 1:13 am on Sunday, the statement said.

Beijing News reported that early investigation results showed the accident, which leaked 6.97 tons of the chemical into the water, was caused by wear and tear of the hose.

The city government said the leak has been classified as a manufacturing safety incident, and further investigations are underway.

Aliphatic compounds are flammable and toxic but not as lethal as aromatic compounds, which were previously suspected to be the chemicals that leaked, Science and Technology Daily reported. However, the paper strongly advised people against breathing in large amounts of the chemical or eating contaminated fish or vegetables.

The incident contaminated 60 hectares of water and 20 hectares of aquaculture farms owned by 152 fishing families. As of Thursday afternoon, the local authorities had dispatched more than 400 vessels and 2,500 personnel to clean up the water, and the work had been mostly completed, the statement said.

The cleanup effort is now focusing on absorbing possible leftover chemicals along the shore and on fishing equipment, it added.

As of Thursday, apart from the spill site, water quality in the surrounding area had returned to good condition.