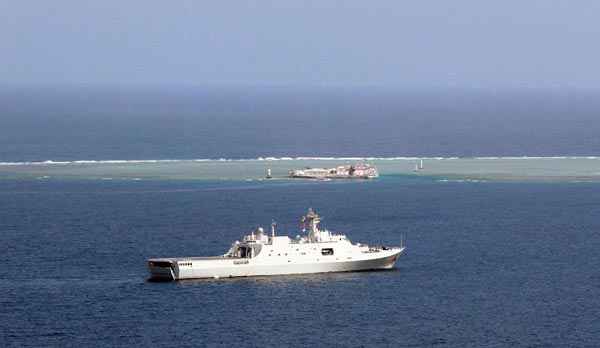 A formation of the Nanhai Fleet of China's Navy finished a three-day patrol of the Nansha islands in the South China Sea. (Photo/Xinhua)

A foreign fishing boat stranded on a Chinese reef in the South China Sea for several months has been towed away, the Foreign Ministry said on Wednesday.

"The owner of the boat failed to tow it away after several attempts and abandoned it, dismantling some major equipment on board."

He said the boat had hampered navigation safety and the maritime environment, so the Ministry of Transport had cleared it from the reef and dealt with it "properly".

"To guarantee the safety of navigation and working conditions, China urged fishing vessels near the site to leave," Hong said, adding that Chinese ships had left the area after the foreign boat was removed.

Although the ministry did not specify the ship's identity, international media said the vessel was from the Philippines.

Observers said Beijing had "foiled a trap" set by Manila to use stranded boats to infringe upon Chinese territory, a tactic that had been used on China's Ren'ai Reef in the late 1990s.

"The Wufang Reef incident reminds me of the Ren'ai Reef case. They are almost the same," said Chen Qinghong, a researcher of South China Sea issues at the China Institutes of Contemporary International Relations.

Beijing says Manila deliberately grounded a warship near China's Ren'ai Reef in 1999. The Philippines refused to remove the vessel ― despite repeated demands by China ― and reinforced the rusting ship's hull and deck. It also sent troops to guard the reef and to occupy it illegally.

"Such actions violated the spirit and provisions of the Declaration on the Conduct of Parties in the South China Sea by changing the status quo unilaterally," Chen said, adding that the incidents also infringed upon China's sovereignty.

Xu Liping, a senior research fellow of Southeast Asia studies at the Chinese Academy of Social Sciences, said that this time China had learned a lesson from the Ren'ai Reef incident.

It had handled the case in a rational and restrained manner, in line with international law, he said.

Wang Guoqing, spokesman for the annual session of China's top political advisory body, said on Wednesday that the South China Sea should be "a sea of peace, stability and cooperation".

"The South China Sea issue should not become an excuse and tool for certain countries to contain China's development," he told a news briefing.