(W.E. Talk) Is the world heading for a recession? 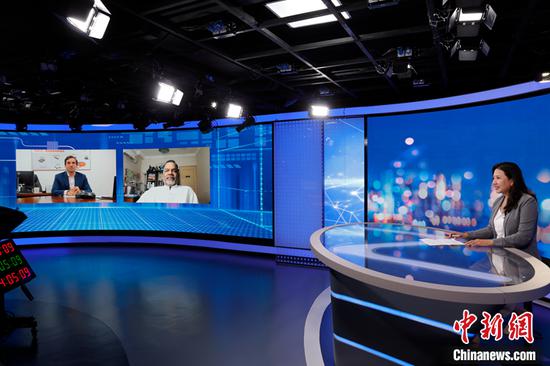 (ECNS)-- When it rains, it pours. Now it's "raining" in global economy.

On the one hand, developed economies such as Europe and the United States have seen rocketing inflation. In June, the U.S. CPI rose 9.1% year on year, hitting a 40-year high, and that in the Eurozone also rose a record 8.6% year on year. Central banks of various countries have been forced to tighten their monetary policy sharply to combat inflation. On the other hand, global food, energy, fiscal, and climate crises all stand in the way to threaten the livelihoods of people in some countries.

What's going on here in global economy? Are we in the middle of a global recession? In the latest W.E. Talk, Bala Ramasamy, Professor of Economics, Associate Dean, Director of GEMBA Programme at CEIBS and Fernando Gomez, Corporate CFO of Premo were invited to talk with Wei Xi, Director of Department of Economy of China News Service.

Prof. Ramasamy holds that the global economy is heading for a recession and such a bad situation may last 12 to 18 months. Developing countries whose energy and other resources rely heavily on imports are likely to be the hardest hit. To mitigate the impact of the recession, governments need to act in concert.

Mr. Gomez thinks we will see the symptoms in the next couple of quarters right after summertime. In his eyes, even though the Chinese economy will suffer from this global recession that nobody can escape, the government will be very decisive and very determined to take action. So he's pretty much sure China will be coming back on track faster and earlier than the rest of the countries.

Here's an excerpt of the dialogue.

Wei Xi: The United Nations recently warned that the world is facing a cost-of-living crisis, unlike anything experienced in an entire generation. The crisis includes food crisis, energy crisis and financial crisis. What is going wrong with the global economy?

Bala Ramasamy: Well, I think you can call this a perfect storm. Now the outcome of this health crisis is these costs of living crisis because there is a gap between the demand and the supply of goods, primarily due to the disruptions in the supply chain. The Ukrainian crisis, which started in February, squeezes the supply chain bottlenecks even further, particularly in the energy and food markets.

Now the cost-of-living crisis is just an unfair crisis really. Because this is a crisis among the low- and middle-income, not among the rich countries. The rich will be able to pay for their higher food prices, higher energy prices and so on. But the low- and middle-income, they rely on fixed salaries and low income. The end result is going to be that the gap between the rich and the poor is going to get even further. The challenge that we face now will make the problems that we have already like income inequalities, poverty political and social stability get even worse.

Fernando Gomez: One of the topics that we are suffering in the European market, is the tremendous economic shutdown that we have suffered for more than a year due to the COVID-19 pandemic. We have seen bottlenecks in many parts of the economy, transportation logistics from Asia to Europe, and as well in some manufacturing sectors. This is a transfer in the supply block and somehow is increasing the prices and costs of manufacturing industries that at the end is infusing into the rest of the economy. This is fueling expectations about future inflation.

Wei Xi: Eurozone CPI upped 8.6% year-on-year in June. I think it's a record high. And the CPI also soared in the United States. What's the impact of inflation on people living in Europe? Do you have any feelings yourselves?

Fernando Gomez: Inflation has impacted very much our business and people in general. So, first of all, is the input cost of our supply chain. People are having higher expectations about compensation catch-up to recover part of that purchasing power they have lost. And this is putting pressure on the cost of the structure of businesses. The second point is the purchasing power option that consumers are having, as people have the less purchasing power, they are having as well less availability or less capability to invest and to buy durable goods. So, at the end of the day, this is affecting businesses as well.

Bala Ramasamy: I think fundamentally the reason is the lag between demand and supply where supply is not able to catch up with the demand. You know the gap keeps on increasing. Of course, you're going to see price increases.

"The U.S. and EU are taking aggressive moves, letting developing countries suffer along with them"

Wei Xi: The Fed has raised rates three times so far this year. In this month, the ECB announced to raise interest for the first time in the last 11 years. Does this help control inflation and reduce the cost of living?

Bala Ramasamy: We don't have a lot of tools to manage inflation. An increased interest rate is the most popular one. But the question is: are we too late? Because the dangers of high inflation have been around since the middle of last year. Now that we have inflation rates that are among the highest in the 1980s. The Federal Reserve, on the one hand, and the European Central Bank on the other, are making aggressive moves in the money market.

But unfortunately, we don't have much more in our toolbox to deal with inflation. Interest rate, as I said, is the most common and the fastest way to deal with it. But of course, it can be painful, it could also cause a major economic slowdown,

"The lowering of the euro will fuel inflation"

Wei Xi: Mr. Gomez, it's also worried that the rising interest rates would lead to a sharp fall in the euro. The Euro fell to the 20-year low against the dollar. So, would you worry about inflation and the lowering of the euro? Will it affect business in Europe?

Fernando Gomez: Well, actually the depreciation of the Euro has caught off by surprise and many operators not only businesses but as well. Theoretically, for European exporters, this is positive. And they will make their products more competitive in all the markets. However, this will fuel inflation as well, imported inflation whatever we buy, in other currencies, different from the euro. And the most important one is gas and oil. So, these will still, let's say, worsen the situation of inflation in Europe.

My main takeaway is the marketing of interest rates has been growing faster than what the European Central Bank has been doing. So, the monetary policy is running behind. Even if we try to do something, increasing interest rates, I don't see euro going back to something that we have seen recently in the level of 1.10, 1.15, and 1.20 because inflation will still be very high. And in a country with high inflation, it doesn't matter how much you have as an exchange rate because your currency is losing power.

Wei Xi: So here comes another question, what other cards does the EU have in hand to prevent an economic recession?

Fernando Gomez: Frankly speaking, I don’t think they have anything as you said "card". Most likely what they will do is to worsen the situation with an economic recession in the next couple of quarters.

"We are going into a recession"

Wei Xi: Are we heading into a global recession? How long will it last?

Bala Ramasamy: I believe we are going into a recession because of controlling inflation. As I mentioned, it is a double-edged sword. Whenever we talk about inflation, recession, and high-interest rates, we have to remember - this does not last forever. If it's a bad situation, probably let's say, 12 to 18 months. That's the average if you look at the crisis that has taken place in the last 50, or 60 years. On average, the bad period is about a year.

Fernando Gomez: I think we will see the symptoms in the next couple of quarters right after summertime. And I know the recession has always a negative connotation. Obviously, there is high unemployment. There is a loss in the business footprint. People suffer. But recession at the end of the day is a balance, and we are starting to see that, for instance, commodity prices started to sharply drop in the month of June.

Wei Xi: How can we make plans to face the recession? Which countries would be the most at risk?

Countries are not made the same. But I think we're having a problem that nobody can escape from it. For example, one big problem here is the price of oil, the price of energy. Countries that have some of these natural resources might be able to better withstand this problem a little bit longer. But the developing countries that are importers of oil, of energy, like Sri Lanka, will have a harder time.

"China's economy will be back on track faster"

Wei Xi: What's your expression of the economy and social development afterward in China? Do you have any view of that?

Fernando Gomez: Well, I have been living in China for 6 years. One of the things I have learned about Chinese society and the Chinese economy. First is resilience, I have seen the capability of the Chinese economy to recover from the past waves (of COVID). That was in a very fast way. So, the flexibility has to recover and come back on track. And this is something we don't see in many other places. My expectation about the Chinese economy is, that even though they will suffer from this global recession because nobody can escape, I'm pretty sure the government will be very decisive and very determined to take action. Actually, we have already seen some of those strong actions to be in place. And I’m pretty much sure they will be coming back on track faster and earlier than the rest of the countries.