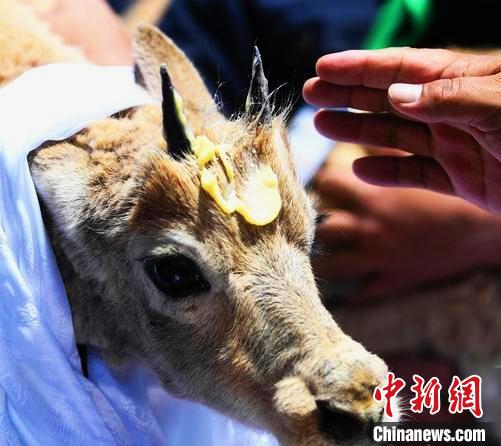 A Tibetan antelope waits to be released into the wild at a wildlife rescue center of the Sonam Dargye Protection Station in Hoh Xil, northwest China's Qinghai Province. (Photo provided to China News Service)

(ECNS) -- Five Tibetan antelopes were released into the wild on Wednesday after being saved by a wildlife rescue center at the Sonam Dargye Protection Station in Hoh Xil, northwest China's Qinghai Province.

Sitting 4,470 meters above sea level, the Hoh Xil wildlife rescue center has saved more than 600 wild animals and released more than 50 Tibetan antelopes since its establishment.

Hoh Xil, which means "a beautiful girl" in Mongolian, is located in the hinterland of the Qinghai-Tibet Plateau, with an average altitude of more than 4,600 meters and a harsh climate.

Since 2009, this famous no-man's land in China has not reported any poaching for 11 consecutive years, and the population of Tibetan antelopes here has reached more than 70,000.

"Nowadays, Hoh Xil has become a true 'animal kingdom', where Tibetan antelopes and other wild animals thrive peacefully and carefree. These wild animals can be seen along the Qinghai-Tibet Highway at any time, forming beautiful scenery along the highway." said Bu Zhou, director of the Hoh Xil National Nature Reserve administration.