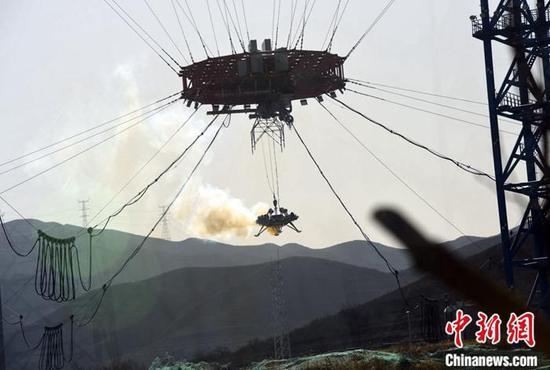 China carries out a key experiment for its coming Mars mission in Hebei province's Huailai on Nov. 14, 2019. (Photo/China News Service)

(ECNS) -- Nearly 100 foreign diplomatic envoys to China as well as representatives of international organizations were invited to view experiments on China’s Mars lander at a base in Huailai County of Hebei Province on Thursday.

Organized by China National Space Administration, visitors witnessed how the lander was suspended in air, descended and avoided collision in a simulated Mars environment.

It was the first time for China’s Mars lander to meet the public amid efforts to increase international aerospace cooperation.

China plans to send a spacecraft into Mars orbit, land and deploy a rover in 2020, its first mission to the Red Planet.

The administration head Zhang Kejian said China has been pursuing international cooperation in space missions over the past six decades, with more than 140 agreements signed with 45 countries and organizations.

Amid such efforts, China cooperated with countries including Germany, the Netherlands, Sweden, Saudi Arabia, Russia and Argentina in its Chang'e-4 mission, which realized the first-ever soft-landing on the far side of the moon.

Ambassadors and diplomatic envoys present at the testing hailed from 20 countries including France, Italy and Brazil.