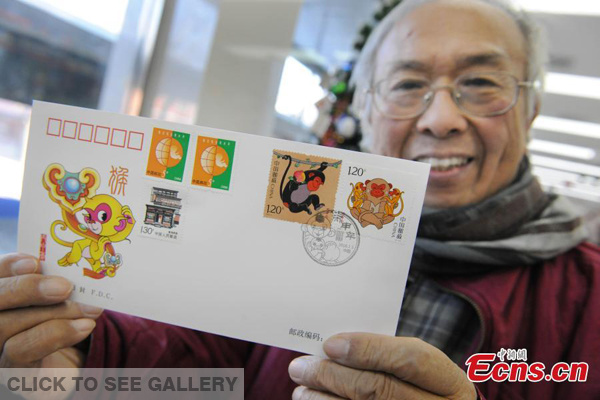 A customer shows a stamp marking the Year of the Monkey they bought at a post office in Beijing, Jan. 5, 2016. (Photo: China News Service/Li Bojing)

(ECNS) -- China's newly released Year of the Monkey stamps were designed to reflect the recent end of its one-child policy, Beijing-based newspaper The Mirror reports.

They were designed by Huang Yongyu, one of the most celebrated cultural icons in contemporary China. They are the fourth round of zodiac animal-themed stamps to be released in 36 years.

The original design was a mother monkey holding her baby to emphasize the concept of home, as required by the China postal service.

But Huang suggested having two baby monkeys since the country adopted a two-child policy. The final design is a monkey with two infants to signify a happy family.