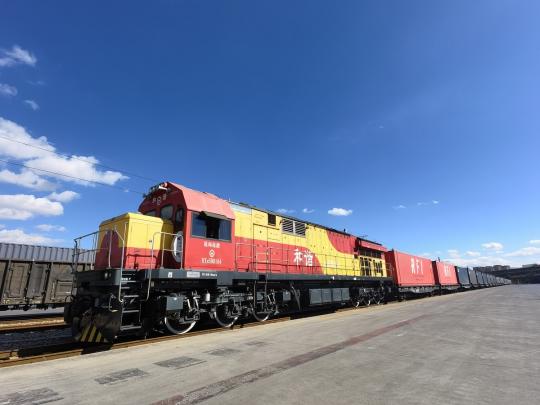 The China-Laos Railway performed well in the transport of both passengers and goods over the last month, boosting tourism, trade and bilateral exchanges. (Photo by Zhang Weiming/For chinadaily.com.cn)

Laotian businessman Phetsamone worked as a driver for three years serving the electricity team of the China-Laos Railway before the line opened to traffic.

As a driver, he earned a meager income. But he saw business opportunities even before it opened. He learned Chinese and started a cross-border trade business buying mobile phones and automobile parts in Kunming, Yunnan province, and selling them in Vientiane, capital of Laos.

"Truck transport was expensive and took a long time to reach Vientiane," said the 52-year-old, adding that he uses the railway to transport freight, which saves time and money.

The landmark China-Laos Railway has brought opportunities to people like Phetsamone.

Saturday marked the first anniversary of the line's operation. According to China Railway International, which manages the line, it handled 8.5 million passenger trips and 11.2 million metric tons of cargo in its first year.

The 1,035-kilometer line runs from Kunming to Vientiane, and takes about 10 hours traveling at speeds of up to 200 km per hour.

Patima works at a bank in Boten, a border city with China. "It is so convenient to travel by train. It saves time and is much more comfortable," she said.

She noted that her family likes to travel by train and hopes to take a direct ride to China in the future.

Due to the epidemic, cross-border passenger service has yet to open.

Yi Bofeng's village is not far from where Patima lives. Both their lives have been improved thanks to the line.

Yi, a native of Xishuangbanna, Yunnan, went to college in Kunming. The 24-year-old recalled that the journey from home to school was "rough" growing up and took her two days by bus.

The trip now takes about six hours by train and is much more comfortable, she said.

Her mother made clothes of the Dai ethnic group and used to sell them in nearby villages.

"Her products have been selling in Kunming after the opening of the railway and more people know her," she said. "I think her clothes can sell further in Laos to allow more people to experience Dai culture."

Yi's family also owns a rubber plantation. After the railway's opening, more dealers have come to our village to collect rubber and offer a better price, she said.

Although the epidemic has prevented cross-border passenger services, millions of international goods have been transported along the line.

According to China Railway International, the line has transported more than 1.9 million tons in cross-border cargo over the year, including more than 1,200 kinds of goods such as fertilizers, electrical appliances, photovoltaic products and cold-chain fruits.

Jiang Zhi, general manager of a logistics company in Xishuangbanna, said his company has transported more than 30 containers of Laotian beer a month to Jinghong, a popular tourist city in Xishuangbanna. With the resumption of the tourism business in China, the volume is expected to increase to more than 50 containers.