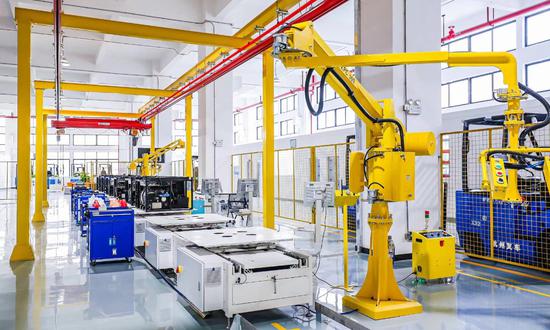 The production line, located in an industrial park in Chancheng district, Foshan city, Guangdong, is specialized for the power systems of industrial vehicles. It is the first set production line for hydrogen energy industrial vehicle manufacturing in China, the Global Times learned from a Saturday press conference, hosted by the China Energy Research Society and local governments.

The production line was completed by the Just Power, a power technology company in Guangdong, within six months.

As the world's largest hydrogen producer, China has an annual hydrogen energy output of about 33 million tons and over 300 hydrogen enterprises that contribute an annual main business revenue of at least 20 million yuan ($2.84 million), the Xinhua News Agency reported.

In a plan on the sector's development for the 2021-2035 period released in March, the country defined hydrogen energy as a significant part of its future energy mix and aims to achieve its green and low-carbon transformation with a vibrant hydrogen energy industry.

China aims to have CO2 emissions peak before 2030 and achieve carbon neutrality before 2060.