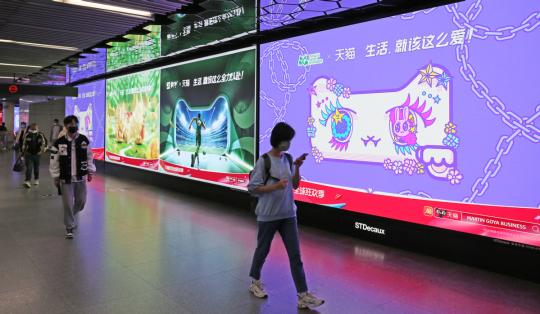 The Singles Day extended shopping festival saw booming sales on its grand opening that kicked off at 8 pm on Monday, four hours earlier than in previous years, with homegrown brands and livestreaming sessions gaining popularity among Chinese consumers.

Data from Tmall, Alibaba's business-to-customer platform, showed that the turnover of 102 brands surpassed 100 million yuan ($13.75 million) in the first hour of its promotional campaign. As of 9 pm Monday, sales of domestic brands — such as camping equipment maker Blackdeer and block toy company Sembo — exceeded that of Nov 1 last year.

Consumers increasingly prefer snatching up bargains via livestreaming on e-commerce platforms, with the number of viewers from Taobao Live, Alibaba's livestreaming arm, up 600 percent year-on-year in the first hour of the promotion.

Sales of home appliance products via JD's online marketplaces exceeded 1 billion yuan in the first minute of the gala, while the transaction volume of mobile phones such as Oppo, Vivo, Samsung and OnePlus surged 100 percent year-on-year in the first 10 minutes of the promotion, according to JD.

In addition, 253 homegrown cosmetics and skincare brands saw sales skyrocket more than 100 percent year-on-year in the first 10 minutes, while sales of more than 1,500 outdoor sports brands jumped 100 percent on a yearly basis during the brief period.

Wang Yun, a researcher at the Academy of Macroeconomic Research, said the Singles Day shopping carnival is playing a vital role in stimulating consumer purchasing appetites, shoring up confidence of shoppers and boosting the recovery of consumption.

More efforts should be made to support and encourage the supply upgrading of homegrown products, launch customized and personalized commodities, and foster a number of high-end brands in the automotive, textile and apparel, consumer electronics, household appliances, foodstuffs and cosmetics sectors, Wang said.

A report from consultancy Bain& Company said Chinese consumers are increasingly shopping across multiple platforms, as 69 percent of respondents said they plan to visit three or more platforms, up from 56 percent in 2021.

Strikingly, 37 percent of interviewees plan to use five or more platforms this year. The company polled some 3,000 Chinese customers on their attitudes toward the annual shopping gala.

"Competition in the livestreaming e-commerce sector has intensified as an increasing number of brands and merchants are flocking to livestreaming rooms of short video platforms including Douyin, Kuaishou and Xiaohongshu — a lifestyle-focused social networking site," Mo said, adding that online retailers should make strategic adjustments to reduce their over-dependence on top livestreaming anchors and support new anchors.

Consumption is playing an increasingly large role in bolstering the development of the real economy in the world's second-largest economy, said Wang Qiang, an associate professor of the Business School at the Renmin University of China, adding that online shopping has provided strong support for China's consumption growth and ensured people's livelihoods amid the COVID-19.