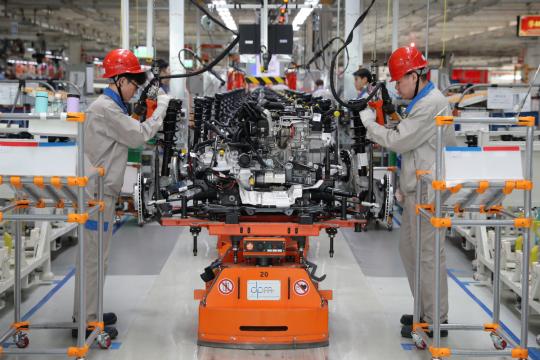 FAW-Volkswagen employees work on an assembly line at the automaker's Tianjin plant. [Provided to China Daily]

Foreign direct investment into China is expected to grow at a stable pace this year, thanks to the country's moves to further expand its domestic market and its status as the biggest trading partner of more than 120 countries and regions, said experts and business leaders.

After surpassing the United States as the world's biggest recipient of foreign investment last year, China continues to see fast FDI growth this year. The country's actual use of foreign capital soared by 43.8 percent year-on-year to $44.86 billion in the first quarter of the year, according to data released by the Ministry of Commerce.

Even though many countries have resumed production since the second half of last year, their completeness of industrial and supply chains cannot compete with China's, and the nation's overall situation of using foreign capital will remain optimistic this year, said Liang Ming, a researcher at the Chinese Academy of International Trade and Economic Cooperation in Beijing.

Backed by GDP growth and strong performances in manufacturing, services and foreign trade, China, supported by the new "dual circulation" development paradigm－in which the domestic market is the mainstay and the domestic and foreign markets reinforce each other－has emerged as a safe and lucrative market for FDI, he said.

Liang predicted that the country will attract over $150 billion in foreign capital this year, while its consumption scale is expected to amount to 42 trillion yuan ($6.5 trillion), with both maintaining positive momentum.

Proposed by the central leadership, the dual-circulation growth pattern emerged as the overriding economic theme, with innovation, opening-up and the need to boost domestic demand identified as priorities during the 14th Five-Year Plan (2021-25) period.

Robust FDI growth between January and March highlighted the confidence of global businesses in the resilience and strong potential of the Chinese market, as well as the government's continuity, stability and sustainability of policies, said Ren Xingzhou, a research fellow and former director-general of the Institute for Market Economy of the Development Research Center of the State Council, China's Cabinet.

While expanding domestic demand and ensuring the smooth flow of internal circulation－the domestic cycle of production, distribution and consumption－China's efforts also focus on boosting exports and imports alike. This strategy will not only build a broader platform for global cooperation, but also encourage more foreign companies to invest in China, said Cha Sheng, general manager for China at Vorwerk Group, a German industrial and technology company.

Vorwerk will establish a digital solution center in Shanghai this year to facilitate its transformation from a manufacturing company to a service-oriented manufacturer.

Olivier Blum, chief strategy officer for French industrial conglomerate Schneider Electric SA, said that since innovative, green and low-carbon products and solutions, including 5G, artificial intelligence, big data and new energy vehicles, will be the driving force of China's economic growth, the group will turn all its 23 plants in China into green factories and help more local partners push sustainable growth in the coming years.

China has been working closely with 14 other partners to ratify the RCEP, which will establish the world's largest free trade zone, before the end of the year.

Yoovidhya said the company will invest more than 1 billion yuan to build new plants and conduct other commercial activities in China from 2021 to 2023.

China will "integrate itself deeper into the world economy, offering huge growth opportunities for other nations", Ning Jizhe, deputy head of the National Development and Reform Commission, said at a news conference in Beijing early this month.

During the first quarter of this year, FDI from members of the Association of Southeast Asian Nations increased 60 percent, while FDI from economies participating in the Belt and Road Initiative rose 58.2 percent and from the European Union, 7.5 percent, according to Ministry of Commerce data.