China to create own standards for cotton 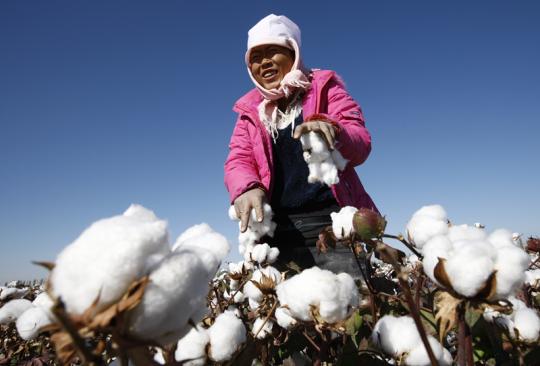 A farmer picks cotton in a field in Hami, Xinjiang Uygur autonomous region, in the fall of 2020. （Photo by Pilates/For chinadaily.com.cn）

System would give industry greater voice, protect its rights in global trade

China is set to release its own version of the Better Cotton Initiative standards soon, as it ramps up efforts to build its own brand of cotton to promote a comprehensive set of principles and criteria for offering high-quality products.

Through Zhongnong Guoji, a cotton service provider based in Beijing, the planned cotton program is set to build China's own industrial standards in a bid to foster high-quality development and promote digitalization of the whole cotton industry, according to Luo Yan, secretary-general of the Zhongnong Guoji-backed Xinjiang Digital Cotton Research Center.

"After years of living with pressure under BCI standards, we just want to build our own cotton brand to have a far greater say in the cotton and textile industry," said Luo, who also is participating in early preparation of the cotton project and recruiting of members in Xinjiang.

Experts said the BCI's current technical requirements, such as banning the use of certain pesticides that were prohibited in the Xinjiang Uygur autonomous region more than 30 years ago, are pretty low, and they mainly concern controlling cotton resources instead of certifying quality cotton.

They said it is time for China to set up its own standards rather than live with the current BCI standards.

Zhongnong Guoji said it had gotten a start on the cotton program two years ago. This year, with the participation of China Fashion Association and the Ministry of Finance-backed Modern Seed Industry Development Fund, the company has completed the basic preliminary work and the three entities are working on a promotion agreement, standards formulation and the establishment of a digital research and development system.

"The first version of the future cotton standards will be released soon, and we will continue to work with the China Fashion Association and Modern Seed Development Fund to attract more cotton farmers and retail brands. We welcome all enterprises in the textile and apparel industry to join the program," Luo added. "Also, we're open to the possibility of establishing a company to promote the future cotton program and handle daily affairs."

According to Luo, the program is poised to better serve the domestic market first, and it is hoped it will go global, empowering more market participants for the long run.

Founded in 2009, the Better Cotton Initiative is a Switzerland-based organization that sets the global standard for cotton industries and certifies cotton farms worldwide, representing around 22 percent of global cotton production in 2019.

Last year, the BCI announced that it would suspend cooperation with licensed farmers in Xinjiang during the 2020-21 cotton season over allegations of "forced labor".However, that statement has now been removed from the organization's website after the Chinese public's backlash over the boycott of Xinjiang cotton.

China is the world's second-largest cotton producer, and Xinjiang is the largest cotton-producing area in the country, according to China Grain Reserves Group.

"Factors such as labor rights, equality and environmental protection are playing an increasingly critical role in the international trade discourse system. Against that backdrop, we need to have a better understanding of the international business rules system, while protecting our rights through commercial and legal means," Yang noted.