Over 4,000 to attend Boao Forum for Asia conference 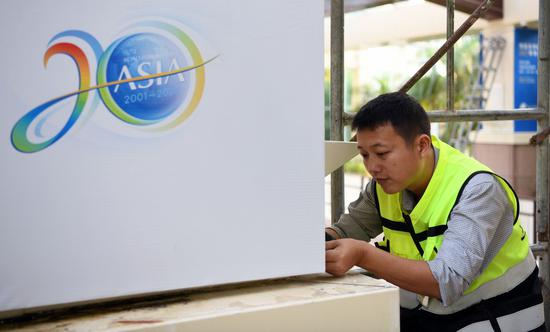 A staff member makes preparation at the main venue for the annual conference of Boao Forum for Asia (BFA) in Boao, south China's Hainan Province, April 10, 2021. The BFA will hold its annual conference from April 18 to 21.(Xinhua/Guo Cheng)

Over 4,000 people will attend the Boao Forum for Asia (BFA)'s annual conference, which is scheduled for April 18 to 21 in Boao, south China's Hainan Province, according to a press conference on Thursday.

Official statistics show that 4,128 people have signed up for the conference, including over 80 Chinese officials, some 60 foreign diplomats in China, and over 130 entrepreneurs from China and abroad.

Four sub-forums will discuss topics like sustainable development of rural areas and island economies on the 21st Century Maritime Silk Road, according to the press conference.

The forum, in its 20th edition, will be mainly held offline but partly online for COVID-19 prevention and control, said Wang Sheng, director of the provincial foreign affairs office.

All forum participants are required to provide a negative nucleic acid test report conducted within 72 hours before entering Hainan and receive another test at one of the province's entry ports, said Zeng Zhaochang, deputy director of the provincial health commission.

The BFA was founded in 2001. It is a non-governmental and non-profit international organization committed to promoting regional economic integration and bringing Asian countries closer to their development goals.