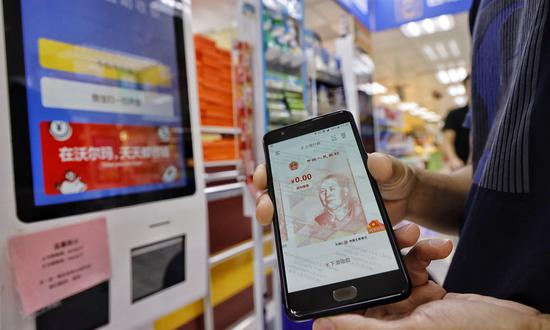 Residents who received "red packets" of digital RMB use the money in stores in Shenzhen, Guangdong Province, on Wednesday. The city launched a pilot program to distribute 10m yuan ($1.49m) in the form of digital currency to residents on Monday.Photo:Li Hao/GT

China announced Saturday it will launch a second public test of its digital currency in the form of "red packets" - consumption coupons. Analysts say the new round of tests involve a wider range of consumer and application scenarios compared to the first public trial.

Back in mid-October, China publicly tested the digital yuan in Shenzhen, South China's Guangdong Province. Local government and China's central bank jointly gave away 50,000 digital red packets each containing 200 yuan. It was the first time that the digital currency test had gone public after a series of internal tests.

New to the Suzhou test of digital yuan is the added online payment in addition to offline application. The red packets can be used on JD.com. Suzhou residents with the receiving address in the urban area can choose self-run goods of JD.com and pay on delivery using digital yuan, without leaving their homes.

The Hong Kong Monetary Authority (HKMA) and People's Bank of China, the central bank, are discussing and preparing technical pilot testing of digital yuan. While the exact launch schedule is unknown, it will offer an additional payment option, said Eddie Yue, chief executive of HKMA on Friday.

"As the yuan is already in use in Hong Kong and the status of digital yuan is the same as cash in circulation, it will bring even greater convenience to Hong Kong residents and tourists from the Chinese mainland," said Yue.

Prior to Yue's remarks, Hong Kong Financial Secretary Paul Chan Mo-po said in November that if the digital yuan could be applied in cross-border payment, it would further promote the connectivity between the Hong Kong Special Administrative Region and the Chinese mainland, especially the Guangdong-Hong Kong-Macao Greater Bay Area.

The year 2021 will usher in an important dividend period of digital industry. After several years of development, the technologies have become more mature, according to Pan Helin, executive director of the Digital Economy Research Institute at the Zhongnan University of Economics and Law.

"In recent years, China's digital industry has been booming, and new technologies such as big data, cloud computing, 5G, artificial intelligence and blockchain have been rapidly developed and widely applied in various fields of social economy, laying a good foundation for the development and application of digital currency," Pan told the Global Times.