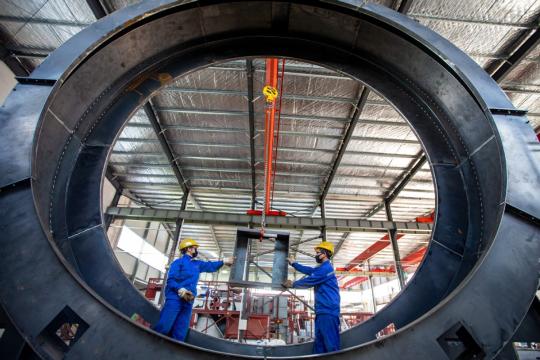 Measures to focus on increasing jobs and promoting fair competition

China is likely to announce a slew of reform measures to facilitate the development of private enterprises at the upcoming annual session of the top legislature, experts and business leaders said on Tuesday.

With the idea of fair competition at the core, the measures will not only help stabilize the private economy and employment, but also inject new momentum for high-quality growth, they said.

Their comments are based on a new guideline unveiled on Monday, which sets the reform path to create an institutional environment that can accelerate improving socialist market economy in a new era.

Acting as the framework for China's future economic reforms, the guideline cited the word "privately-owned" 11 times and called for systemic reforms to ensure equal treatment to enterprises of different ownership types.

Key reform areas included the use of production factors, market access, government procurement and property rights protection, according to the guideline, released by the Communist Party of China Central Committee and the State Council.

For instance, the country will refine related regulations to make the electricity, oil and gas markets more accessible for the nonpublic sector, as well as broaden market access for social capital to the services sector, the guideline said.

Legislative efforts will also be stepped up to ensure the equal protection of public and private property rights, it said.

Wu Chaoming, chief economist with Hunan province-based Chasing Securities, said the guideline attaches great importance to supporting private enterprises as they have taken the brunt of the COVID-19 shock.

"Reform efforts outlined in the guideline will help bail out private businesses and they will play a critical role in boosting economic recovery and stabilizing employment," Wu said.

The annual session of the National People's Congress, set to kick off on Friday, is expected to give detailed implementation plans of the outlined reforms, especially in terms of broadening market access and strengthening financial and fiscal aid, he said.

The guideline calls for increasing the supply of financial services targeted at small and medium-sized enterprises, which are typically privately-owned, as well as establishing a long-term system of preventing arrears owed to private enterprises.

In the longer term, the reform efforts to create a fairer competition environment for private businesses will motivate their creativity and vitality, therefore elevating economic efficiency, Wu said.

Business leaders from major private businesses said they look forward to the implementation of the reforms and will continue making innovations to achieve quality growth.

The guideline has been a timely support for private enterprises and has boosted their confidence for future development, said Zhang Jindong, chairman of Suning Holdings Group, a privately-owned retail giant.

"As the Chinese economy changes gears to high-quality development, Suning is undergoing the evolution from quantitative expansion to efficiency enhancement," Zhang said, adding the company will increase infrastructure investment for its smart retail system this year.

Suning plans to add 30,000 jobs this year and has launched several major investment projects since the beginning of the year, such as the ones in East China's Jiangsu and Anhui provinces, Zhang said.

Zhang Jiangping, chairman of Ningbo Peacebird Fashion Co Ltd, a major multibrand fashion company in China, said the company will deepen its data-driven strategy to empower growth this year, despite the COVID-19 disruption.

The guideline has reflected the top leadership's intention to tackle the economic impact from the COVID-19 epidemic by deepening market-based reforms, according to experts.

A recent meeting of the top leadership decided that the government should push forward supply-side structural reform and promote high-quality development driven by reform and opening-up while making regular disease prevention and control measures a priority.