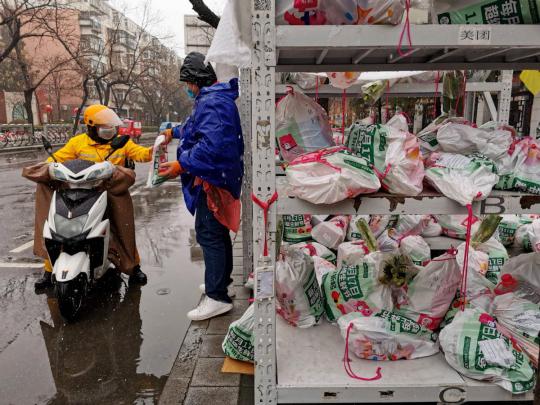 A deliveryman picks up a package from a storage area of online fresh food platform Missfresh in Beijing on Feb 14. (Photo by Li Wenming/For China Daily)

Chinese e-commerce and delivery or courier companies are fast embracing contactless delivery to meet rising demand from health-conscious Chinese consumers who find themselves staying indoors mostly due to the novel coronavirus outbreak.

Contactless delivery refers to dropping off take-away food parcels or other packages at a designated pick-up spot in residential communities or on office premises.

These days, all-out efforts are being made to prevent human-to-human transmission of the novel coronavirus in China, a country known for widespread online shopping that entails frequent courier deliveries. Risk management involves pre-empting contact between the consumer and the deliveryman.

Meituan-Dianping, the country's leading on-demand service platform, first announced an in-app function for contactless delivery in late January. The feature was launched first in Wuhan, capital of Hubei province, and then expanded to 184 cities.

Missfresh, an online fresh food platform, said it plans to build a storage area each at 5,000 residential communities in Shanghai for consumers to pick up things. It has plans to introduce such facilities next in Suzhou, Nanjing and other cities in Jiangsu province.

Industry insiders said contactless delivery is being preferred by everyone these days, which is expected to drive the development of intelligent lockers and unmanned delivery in the long run.

So far, more than 150,000 medium and large e-commerce platforms have delivered over 160,000 daily orders in Wuhan where the outbreak erupted first.

Beijing also boasts more than 400,000 orders and nearly 20,000 deliverymen on the road each day, according to the Beijing Market Regulation Bureau.

"Though most consumers choose contactless delivery due to perceived risks in personal interactions with deliverymen, their preference for such services will likely result in increase in intelligent lockers. Other related infrastructure will likely be built in coming months," said Wang Zhibin, a researcher with the National Engineering Laboratory for Logistics Information Technology in Shanghai.

Contactless delivery is considered a natural evolution of current practices in the courier industry, and could make the service more efficient and hygienic, Wang said.

"So, the percentage of contactless deliveries is expected to increase, which will further spur the development pace of intelligent lockers, unmanned aerial vehicles as well as self-driving delivery cars in the future."

Agreed Xiang Feng, vice-president of YTO Express. Contactless delivery is more acceptable to Chinese consumers and represents the latest innovation in the country's courier and logistics sector, he said.

More than 406,000 intelligent lockers were installed in major Chinese cities last year, up from 127,000 in 2018, according to the State Post Bureau of China.

"We will beef up our investment in the information technology and digitalization, especially in the application of creating more scenarios at the end of delivery," said Xiong Dahai, vice-president of STO Express, a prominent courier firm.