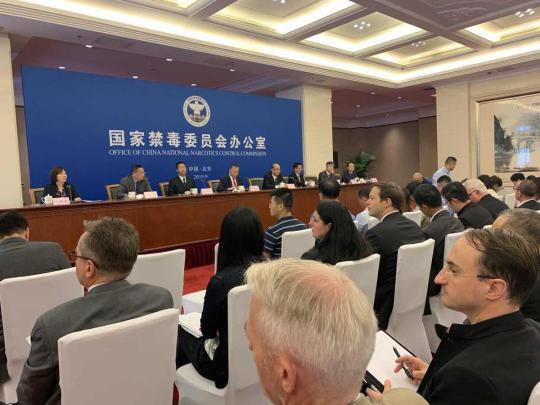 China's senior narcotics control official has said blaming China for the influx of fentanyl in the United States based on the limited number of postal packages seized by U.S. authorities lacks evidence. It's also inconsistent with the actual situation, the official said on Tuesday.

According to statistics provided by the U.S. authority, the U.S. Customs and border control authorities have handled 229 trafficking cases involving 536.8 kilograms of fentanyl-related substances between October 2018 to March 2019. Among them, only 17 cases came from China with 5.87 kg seized, Liu Yuejin, deputy director of the National Narcotics Control Commission, said at a news conference in Beijing on Tuesday.

Since 2012, China has provided U.S. authorities with six leads on the trafficking of fentanyl-related substances and three of them have been cracked, Liu said.

China strictly controls fentanyl-related substances, launching a new wave of measures to tackle the issue in May. One such policy is the inclusion of 25 fentanyl analogues on China's list of controlled substances at the start of the May, four more than the U.S., Liu said. Since adopting these measures, China hasn't found any criminal cases involving the production and trafficking of fentanyl-like, according to the National Narcotics Control Commission.

The Ministry of Public Security has established six laboratories across the country to better identify fentanyl-related substances. The National Narcotics Control Commission has also launched inspections on chemical and biochemical industrial parks around China. Law enforcers have also stepped up efforts in preventing people from trading fentanyl-related substances online, according to the commission.

Fentanyl is 50 times stronger than heroin, and proving increasingly popular with U.S. drug users, with the rate of overdose deaths from heroin in the county remaining high in recent years.