Drugs made overseas to be tax-free 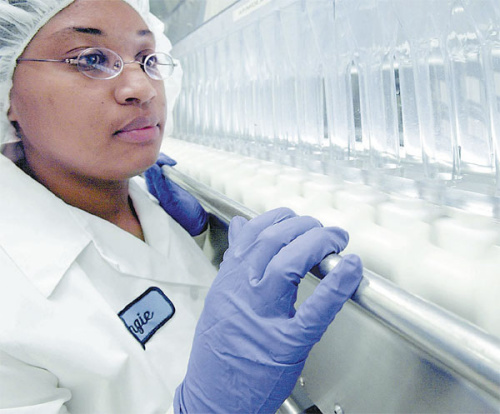 An employee of AstraZeneca's plant in the United States inspects the production line of the lung cancer drug Iressa. (Photo provided to China Daily)

Pharmaceuticals made overseas, including cancer drugs and traditional Chinese medicines, will be exempt from import taxes starting May 1, as part of a package of policies to improve drug access and public health in China.

The move comes just over a week after the central government released measures to boost the production and clinical application of generic drugs to help lower the cost of medical bills.

The State Council, which announced the exemptions after an executive meeting on Thursday, also said the value-added tax on the production and import of drugs will be cut by a large amount, a decision experts say will be even more effective in easing patients' financial pressures.

Imports of innovative medicines will be encouraged, while the protection of drugmakers' intellectual property rights will be strengthened, the Cabinet said.

This month, the central government issued a notice encouraging the development and production of generic drugs that are in short supply.

A generic drug is a medication that has the same active ingredients as a brand-name patented drug and yields the same medicinal effects, but it can be marketed only after the patent has expired.

"Generic drugs are less expensive because their manufacturers don't have to duplicate the original clinical trials for effectiveness and safety, which lowers the cost of bringing the drug to market," said Yu Li, an expert at the Beijing Institute for Drug Control.

About 95 percent of the nearly 170,000 drug production projects approved in China were for generic medicines, according to the National Health Commission.

The notice said government departments will draft a list of generic drugs that are in demand and will support their production with policies such as preferential tax rates for pharmaceutical companies.

To speed up the evaluation process, a testing system will be set up through several departments, including the nation's top health, drug and science authorities, the notice said. It also emphasized that the quality of generic drug production should be enhanced.

Competition between drugmakers was once unregulated, and the quality of products could vary and even be unsatisfactory, Xinhua News Agency recently quoted an unnamed official from the National Health Commission as saying.

China is home to more than 4,000 pharmaceutical companies that produce generic drugs, according to the China Food and Drug Administration, which is now part of the newly created State Market Regulatory Administration.

The notice stressed that strengthening safeguards for intellectual property related to drug innovation and production will be a priority, with the interests of patent holders balanced with the public's needs.

Infringing patents will be prohibited, it said. However, the government notice said that in the event of a serious epidemic or public health emergency that threatens lives, compulsory licensing and production of patented drugs will be initiated to allow generic copies onto the market as soon as possible.