Will China's bike-sharing schemes ride to success in Britain?

Bikes locked along a street in Oxford. (Photo/CGTN)

China's ubiquitous yellow bicycles could soon hit the streets of the United Kingdom following their massive expansion in Chinese cities. However, will the Chinese business model of shared-bikes ride their success overseas?

In the small British city of Oxford, cycling is quite popular. Many cycle to work, university and school. Recently, several Chinese bike-sharing companies were in touch with the Oxford city council on the possibility of rolling out their services. This comes after China's largest bike-sharing operator Ofo launched a trail in Cambridge.

The Oxford City Council is very supportive of cycling as it helps to reduce traffic and pollution.

Oxford City Councilor Louise Upton said, "This is brilliant. The more people we can get on bike-sharing bikes in Oxford, the better." 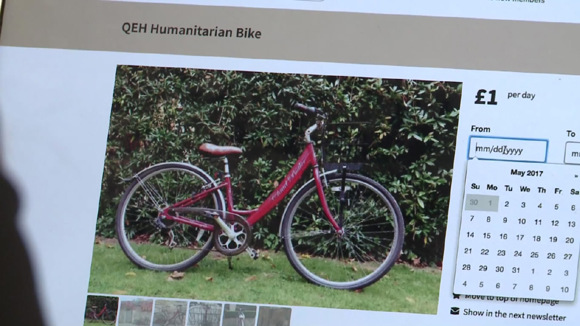 Upton, who also chairs the Oxford City Cycling Forum, added that, "But it absolutely has to be well managed so it is not nuisance to other people. So people welcome it and say that's great, rather than thinking there is another bike littering the pavement."

Oxford is acknowledged as one of few true "cycling cities" in the UK. Some biking-sharing schemes have been introduced in the city, but they are quite different from the business model seen in China.

In 2016, Oxford graduate Agne Milukaite launched Cycle.land, a peer-to-peer bike-sharing platform that enables people to borrow bikes from local cyclists, families and vendors, from as little as one pound per day. It unlocks the use of bikes that are currently standing locked up and unused in the city.

"If you have a bike, you don't use it all the time. You can put it up online, write a short description, put a picture, set a price for the day," Milukaite explained the simple idea behind her "Airbnb for bikes" platform, "Somebody comes, rents your bike, for a day, a week, a month. "

Clearly, bike-sharing schemes and their business models differ from city to city, catering to each city's needs and demand. But one major difference in comparing the UK to China, is space.

"We don't have the space to store the bikes that you maybe have in China. And not everybody is used to cycling as much as we're used to being in cars," said Adam Workman, Head of New Ventures Support and Funding at Oxford University Innovation.

"When you look at [bike]-sharing schemes in the UK, we are focusing on areas where people are used to cycling. And we have existing bikes so there's not necessarily the need to buy new bikes. We don't have the space to store them," said Workman, "So we're looking at different business models compared to the Chinese business model of bike-sharing."