Shanghai zoo helping to save the rhino

Qiangqiang, a male southern white rhino, has been living in Shanghai Zoo since 2007. (Photo/Shanghai Zoo)

The rhinoceros is the second largest land mammal after the elephant. On March 19, Sudan, the world's last known male northern white rhino, died in Kenya. Two females at the Ol Pejeta Conservancy in Kenya are protected round-the-clock by armed guards.

There are five kinds of rhino ― white, black, greater one-horned (Indian), Sumatran and Javan. Of the white rhinos, there are two subspecies, the northern white rhinoceros and the southern white rhinoceros. The Javan rhino is the most threatened of the five main types, with just 58-68 individuals living in Indonesia.

Since 2007, two southern white rhinos have been living in Shanghai Zoo's rhino pavilion, Qiangqiang, a male, and female Amei both came from South Africa at the age of 3.

To distinguish the two, Qiangqiang has a small hole on his right ear. 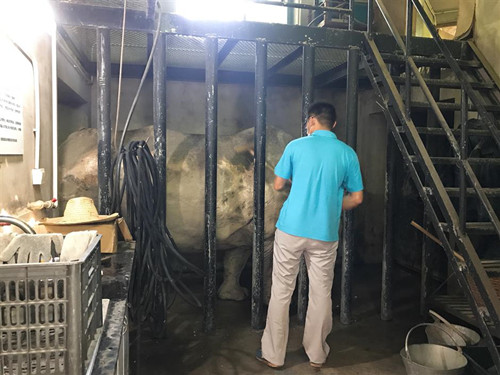 Geng Guangyao has been taking care of the two southern white rhinos since 2017. Previously he was working with the elephants.

"The name white rhino is actually a mistranslation from the Dutch word 'wijd,' which means 'wide' in English but was misinterpreted into 'white,' so the rhinos with the wide mouth became white rhino," Geng said.

The white rhino is not only the largest species of rhino, but is also quite social and gentle. When Geng walks near the back gate of the rhinos' enclosure, Qiangqiang immediately comes over to him.

The white rhino has a wide mouth to graze food, which works almost like a mower, said Geng. When the rhino eats in the wild, it can raze the grassland to the ground. The rhino relies on smell to locate food, so Qiangqiang is able to pick up a small piece of apple on the ground easily.

In 2010, a short documentary was produced to tell the story of how Amei's ailment was treated. Amei still has scars from the skin disease, which was healed by adding antiseptics to the mud and pouring that onto her skin.

"Amei was quite ill, at one point she was scared of needles because of the blood drawings and transfusions, and would run away from people," said Geng.

The zookeepers are training the rhinos to receive medical examinations voluntarily, and regular body checks enable them to check on their health more easily.

Amei can walk into a room and allow Geng to draw blood from her ear without backing away or panicking. Geng has also made a large brush to scratch Amei's skin, which she enjoys. Qiangqiang and Amei are friendly to each other like brother and sister, although they do occasionally have disagreements and minor skirmishes. Despite their size and weight, the rhinos are surprisingly agile, and the pair often chase after each other for fun. Their favorite activity is rolling in mud.

"They are especially good at making quick and sharp turns, like running very fast and suddenly making a 180-degree turn in the opposite direction," said Geng.

The rhino's legs and feet are quite small compare to their body size, so zookeepers keep a close eye on them to prevent them from spraining their ankles. The rhinos eat 1 to 2 percent of their body weight a day of dry matter, so Qiangqiang needs at least 25 kilograms of hay, or 150 kilograms of fresh grass. They also eat fruits and vegetables such as apples and carrots. They are fed twice a day at 9am and 3pm.

"It's not easy to take care of large mammals like the elephant and rhino, we have to watch their status very closely, and it's not easy to secure them for examinations like the smaller animals," said Geng.

Though the number of southern white rhinos may be of less concern than that of other kinds of rhinos, the species was at the edge of extinction in the late 19th century. But in 1895, a small population of less than 100 individuals were discovered in South Africa where, after more than a century of protection, the species' status reached "near threatened" with around 20,000 animals in existence.The wild population of southern white rhinoceros is under threat from the loss of their habitat and poaching.