Though sitting on separate ends of the ocean, the cultures of ancient China and the Maya civilization might bear more similarities than we originally thought, according to the findings of Chinese archaeologists working at the Maya site of Copán in western Honduras over the past three years.

Some of the sculptures unearthed at the site possess similar designs and decorations to those made by China's Neolithic Liangzhu Culture, notably sculptures of the Maya feathered god serpent Kukulkan found at the Copán excavation site have a strong resemblance to dragon images in China.

These discoveries has drawn public attention to the concept of the "China-Maya continuum" proposed by late Chinese American archeologist Kwang-chih Chang in the 1980s, which suggests a link between the Chinese and Central American cultures based on their shamanistic roots.

Other similarities include parallels between the ancient Mayan calendar and the portion of the traditional Chinese calendar known as the 10 Heavenly Stems and 12 Earthly Branches.

"Even though similarities do exist between the two cultures, there is no historical evidence that direct communication occurred between them," Li Xinwei, head of the Chinese archaeological team from the China Academy of Social Sciences (CASS) Institute of Archaeology working at the Copán excavation site, told the Global Times in an e-mail interview on April 8.

"Central American culture took shape around 15,000 years ago when northern and eastern Asian humans migrated to the Americas through the Bering Strait, but since then it developed quite independently with little interaction with other civilizations," Li explained.

Li noted that the similarities between the two ancient cultures may stem from the fact that they share the same Paleolithic ancestors and cultural genes.

'Athens of the Maya world'

One of the most important remains of Maya civilization, Copán was once a central Maya city and a major maize producer in the region. For this reason, archeologists sometimes refer to it as the "Athens of the Maya world."

The site entered the limelight during the mid-19th century after U.S. explorer John Lloyd Stephens and British painter Fredrick Catherwood published an illustrated journal of their expedition to the site in 1841. In 1891, a U.S.-led archaeological exploration of the site started after Yale University's Peabody Museum signed a 10-year agreement with the Honduran government. Current, archaeologists from the U.S., Japan and Guatemala are working along with Chinese experts.

Chinese team's excavation work at the site officially kicked off in 2015 after the CASS Institute of Archaeology and the Honduras Institute of Anthropology and History signed an agreement in 2014.

Li and his team's task is to explore the remains of a residential building complex designated as 8N-11.

Covering an area of some 4,000 square meters, the complex was once the home of local aristocrats more than 1,000 years ago.

So far, Chinese archaeologists have determined the original structure of the northern side of the building complex as well as identified the symbols and decorations found on its walls.

"The 13 groups of designs featuring crossed torches are exactly the same as those found in the No.29 building in the site's royal court area," Li said. "Crossed torches were a major royal symbol."

Another important discovery at 8N-11 is a large tomb designated as T3. A number of important items have been unearthed from T3 including a collection of jade relics featuring images such as Kawiil, the legendary Maya god of lightning, and depictions of major Ajaw - the title for local rulers.

These findings further highlight the links between the aristocrats living in this area with the city's royal family, Li noted.

The Chinese team's plans for 2018 involve explorations of the western and southern sections of the complex and continued study of the discoveries made during the team's previous excavations. 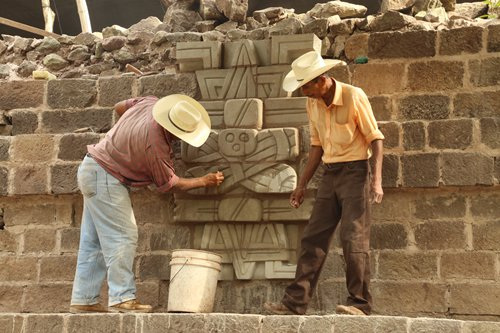 Working with their foreign counterparts has been an inspiring experience, Li said.

"Western research agencies have been working in Central America for more than a century now and have come up with many effective approaches such as numbering systems for the relics that have inspired us when it comes to our excavation work in China," he said.

Chinese archaeologists, on the other hand, have been able to share their earth analysis expertise with other teams at the excavation site.

The past decade has witnessed an increasing number of Chinese archaeological teams going overseas to work at foreign sites. The Copán project is special, however, not only because it is located at the birthplace of one of the world's oldest civilizations, but also due to how it stands apart from other Chinese efforts in other countries.

The ongoing cooperative excavation in Uzbekistan, for instance, aims at finding the ancient state of Dayuan that was recorded in Chinese historical documents, while archaeological cooperation with Mongolian and Bangladesh experts have focused on studies about the Xiongnu - a nomadic people that inhabited the eastern Asian Steepe and frequently came into conflict with China's Han Dynasty (206BC-AD220) - and Tibetan Buddhism respectively.

"Unlike many other Chinese overseas archaeological projects that are actually related to Chinese culture and history, the Copán project's major subject of study is a completely foreign civilization," Li told the Global Times.

"Building China's cultural confidence is not just about learning about the greatness of Chinese civilization, but also about getting to know more about overseas civilizations as well," he said.