A mural painting of Yuan dynasty-era chuiwan is preserved on the wall of a Water God Temple in Hungtung county, Shanxi province. The painting depicts a Mongolian official (on the left, wearing a fur hat), Han officials and assistants. The sticks and devices are fairly identical to those of modern golf. (Photo provided to China Daily)

The Scots may well have codified golf as we know it - including, after a few false starts, making it a game of 18 holes. But the jury's still out on who first came up with the idea of an open-air game that involves using a stick to hit a ball towards a target. The Romans played a game called paganica, in which a ball stuffed with feathers and wool was hit with a bent stick, while the Dutch played a stick-and-ball game called colf as early as the 13th century.

But the most intriguing ¨C and in many ways convincing ¨C documented evidence of an early version of golf comes from China. A game called chuiwan (´·Íč) ¨C chui meaning to hit and wan meaning ball ¨C became popular in the Song dynasty (960¨C1279) and was featured in paintings as late as the Ming dynasty (1368¨C1644). Players used ten clubs to hit wooden balls towards brightly coloured flags ¨C sound familiar? They had a club for long distances, a precursor of the modern-day driver, and the tee was called the ji (»ů), or base in Chinese.

There was even an early equivalent of the R&A Rules of Golf: the Wan Jing (Íčľ­) or Classic of the Ball, published during the Yuan dynasty (1271¨C1368). It lays out the rules, and places great emphasis on sportsmanship and correct behaviour ¨C echoes of modern golf, where etiquette is such an important element of the game. There's also a reference in an ancient book to a magistrate of the Southern Tang dynasty (937¨C976) telling his daughter to "dig holes in the ground" so he could hit a ball into them using a special stick.

The old imperial paintings show clubs bearing a striking similarity to modern golf equipment ¨C long, narrow shafts with distinct heads for striking the ball. One depicts the Ming dynasty's Emperor Xuanzong playing chuiwan on a course that's clearly marked out with flag sticks and that looks identical to a modern putting green.

The game seems to have died out in China during the Qing dynasty (1644¨C1912), while golf as we know it today was first played in Scotland in the 15th century. (It was even briefly banned by James II of Scotland in 1457 because it distracted players from learning archery ¨C a skill required for the army.) The first rules of golf were drawn up by the Honourable Company of Edinburgh Golfers in Muirfield in 1744. Ten years later, the Society of St Andrews Golfers, the forerunner of the Royal and Ancient Golf Club, was formed and became the governing body. 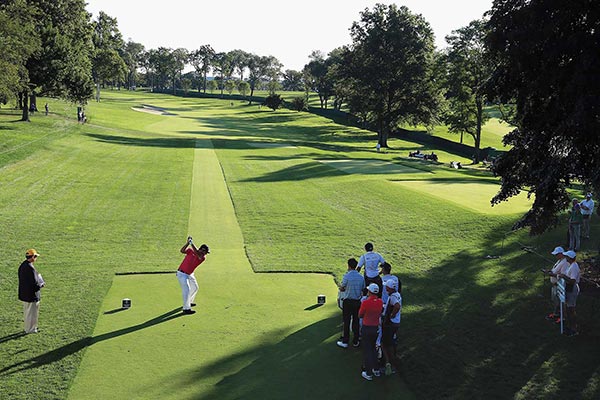 Patrick Reed of the United States plays his shot from the first tee during round two of The Northern Trust at Glen Oaks Club on August 25, 2017 in Westbury, New York. Ł¨Photo provided to China DailyŁ©

The debate over who got there first will go on as long as the game is played, but at least two things are certain. First, chuiwan, played by Chinese emperors 1,000 years ago, certainly qualifies as a royal and ancient game. And second, it was definitely the Scots who invented that other great golfing tradition: the 19th hole ¨C that moment when you step up to the bar in the clubhouse and order a dram of whisky to erase the memory of the last putt that got away.