Shaanxi Provincial Institute of Archaeology announced the significant discovery on Monday on its official website, saying that the finding had great academic value for in-depth research on social institutions and politics of the Qin (221-206 BC) and Western Han (206 BC-AD 24) dynasties as well as ancient Chinese ritual culture.

From April to November, a joint archaeological team consisting of archaeologists from the institute, and several local archaeological institutions completed the excavation of 2,000 square meters on the sacrificial site, which was approved early this year by the State Administration of Cultural Heritage.

"The excavation completed a wider archaeological survey of this large ancient site, which had a total area of 4.7 million square meters, and produced important findings, with the confirmation of more than 3,200 related sites, including buildings, facilities, roads and sacrificial pits," said Tian Yaqi, a researcher with the institute and chief of the archaeological team undertaking the excavation. 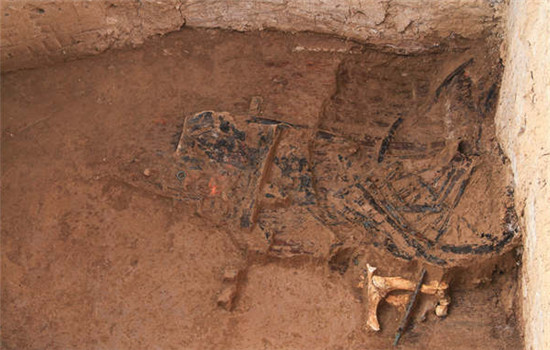 A wooden vehicle unearthed from from an ancient sacrificial site in Fengxiang, Shaanxi province. (Provided To China Daily)

The ancient sacrificial site, named Yongshan Blood Pool, is located in Fengxiang, about 15 kilometers southeast of the Yongcheng ruins, which is believed to have been the capital of the state of Qin (770-221 BC).

"The excavation focused on a rammed earth platform and sacrificial pits, two site ruins with different characters, and it is the first time we have found such imperial sacrificial sites, which are identical with ancient records," Tian said.

At the sites, archaeologists found 2,109 relics, mainly including jade articles, and bronze chariots and horses, which were often used for sacrificial offerings in ancient times. 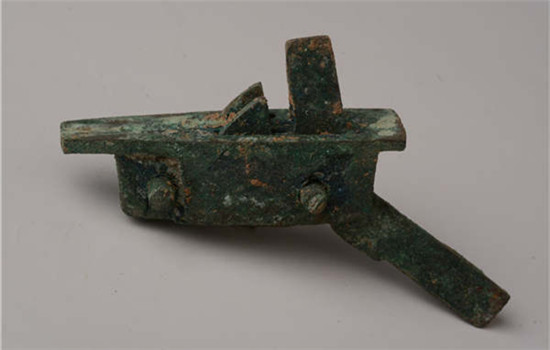 A crossbow mechanism from an ancient sacrificial site in Fengxiang, Shaanxi province. (Provided To China Daily)

Tian said that Yongshan Blood Pool is an ancient name for the location, which is believed to have been used to slaughter and bury livestock for sacrifice.

Liu Qingzhu, a famous archaeologist and academician at the Chinese Academy of Social Sciences, and former director of the academy's Institute of Archaeology, said that the unearthed jade figurines, ornaments of bronze chariots and horses, tiles and other relics found at the sites play an important role in defining the sites' nature and age.

"Sacrificial offerings have been one of the core values of civilizations worldwide, but such large-scale sacrificial ceremonies were only seen in Chinese civilization," Liu said.