Li Sanren (L) and Shang Aiyun, parents of Huugjilt, who was wrongly executed for rape and murder at age 18, show the verdict of state compensation totaling more than 2 million yuan (about $322,000) in Hohhot, capital of north China's Inner Mongolia Autonomous Region, on Dec 31, 2014. On Dec 15, 2014. (Photo/Xinhua)

Twenty-seven officials were penalized over the wrongful conviction and execution of a man 20 years ago, authorities in north China's Inner Mongolia Autonomous Region said in a statement Sunday night.

One of the blacklisted officials responsible for the wrongful conviction of Huugjilt, Feng Zhiming, was suspected of job-related crimes and was subject to further investigation, it said.

Feng, formerly deputy chief of the Xincheng District branch of the public security bureau of the regional capital Hohhot, may face criminal charges, according to the statement.

The other 26 officials received administrative penalties including admonitions and record of demerit.

On the blacklist were 11 former police officers with the public security bureau of Hohhot and its Xincheng District branch, including Wang Zhi, former chief of the bureau.

Seven were former officials with the people's procuratorate of Hohhot, including Wen Da, former chief procurator.

Five were former officials with the region's higher people's court, and three were from the intermediate people's court in Hohhot. 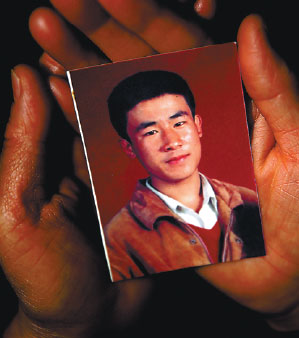 Hugjiltu's mother, Shang Aiyun, holds a photo of her son, who was wrongfully executed 18 years ago. (Photo by Guo Tieliu/for China Daily)

The wrong conviction of Huugjilt is one of the most notorious cases of judicial injustice in China in the recent decade. The teenager was declared guilty of raping and then murdering a woman in a public toilet. He was posthumously acquitted of the crimes in December 2014.

The real convict, Zhao Zhihong, was apprehended in 2005 and given death penalty last year.