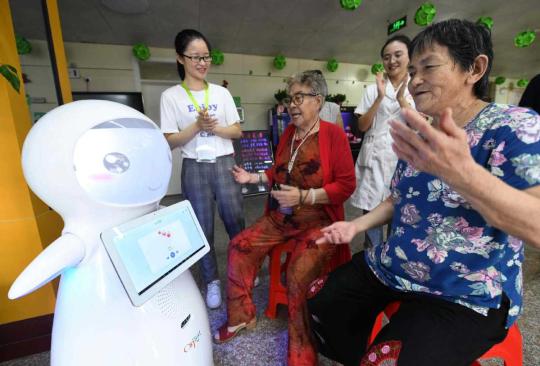 A robot interacts with residents of an elderly care home in Fuyang, Anhui province. [Photo by Wang Biao/For China Daily]

Editor's Note: Central and local regulators will reportedly launch a massive investigation into unfair competition in key areas such as medical care and the internet. 21st Century Business Herald comments:

This marks an intensive law enforcement campaign following the revision of the Law on Anti-Unfair Competition by the National People's Congress, the top legislature, on April 23. The move is aimed to create a fair and competitive business environment, maintain market order and protect the rights and interests of consumers. The newly-established State Administration for Market Regulation will lead the campaign.

As competition becomes increasingly fierce in some fields, unfair competition has become increasingly common, complicated and widespread in recent years, even evolving into a chronic malaise particularly in education, medical care, the internet and other service industries.

With its rapid development in recent years, the internet sector has become a behemoth that desperately needs regulation from the top regulator. The anti-unfair competition law stipulates that market players shall not make false or misleading commercial publicity on the "sales status" or "user evaluation" of their commodities to deceive or mislead consumers. However, in the field of e-commerce, malpractices such as overstating sales volumes or employing some to give good comments are very common. Some websites even use technical means to engage in unfair competition behavior that hinders or undermines the normal products or services legally provided by other competitors.

Medical care is also an area plagued by unfair competition, which is more hidden, but more deeply hated by the public. For example, some pharmaceutical companies bribe hospital doctors or procurement staff to promote and sell their medical products.

At present, China is working hard to build a market environment of fair competition under the rule of law, in order to encourage fair competition and protect the legitimate rights and interests of market operators and consumers and lay a solid foundation for the establishment of a modern economic system and the realization of high-quality development.

The anti-unfair competition law enforcement is part of such efforts. To support the campaign, the making or revision of other laws may also be needed.