The prospects of U.S.-China relations are very promising, according to participants of the U.S.-China Think Tank Symposium, which opened Monday in Des Moines, capital of U.S. state of Iowa.

More than 20 Chinese and U.S. experts and scholars gathered here to deliberate on such topics as Sino-U.S. relations after the Mar-a-Lago meeting, economic and trade cooperation, local cooperation and the prospects of the relationship between the two countries.

In a speech at the opening ceremony, Former Minister of the State Council Information Office Zhao Qizheng said rapid development of Sino-U.S. economic and trade cooperation not only is an epitome of Sino-U.S. relations, but also helps build up a solid foundation for Sino-U.S. cooperation in other fields.

The relationship between China and the United States has experienced ups and downs all the way along but has kept forging ahead as economic and trade cooperation played the roles of "ballast stone" and "propeller," Hong said. 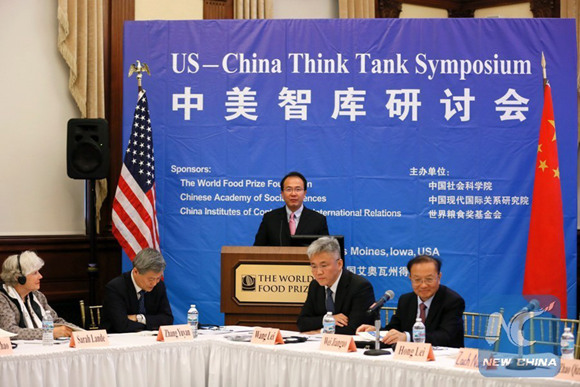 "China-U.S. relationship is one of the most important bilateral relations in the world, for which economic and trade cooperation is the most active and lasting driving force," Hong said.

Statistics also show a rosy picture of China-U.S. partnership in terms of education and investment.

The Chinese Ministry of Commerce estimated that Chinese students studying in the United States spent about 45,000 dollars per person in 2016, contributing around 15.9 billion dollars to the U.S. revenue.

In the meantime, Chinese investment in the United States is growing rapidly. A report by the National Committee on U.S.-China Relations and Rhodium Group indicated that Chinese enterprises invested 45.6 billion dollars in the United States in 2016, a 200-percent increase from the previous record set in 2015.

Earlier on Sunday, Chinese think tank researchers visited Kimberley Farm, where they exchanged views with farm owner Rick Kimberley on management of modern farms and also on agricultural exchange between the two countries. 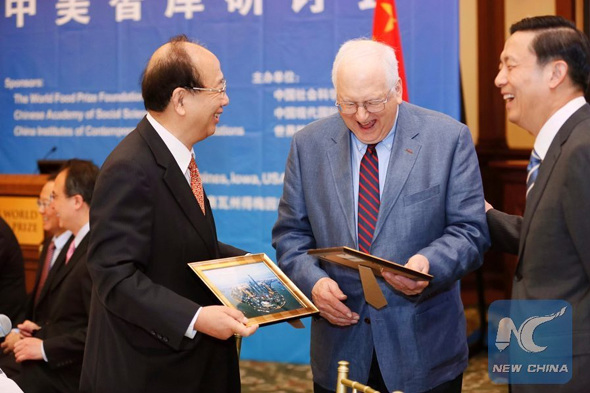 As a witness to the booming agricultural ties between China and Iowa, the Kimberley family is not only exporting soybeans to China, but also introducing their advanced farming technology to China, the largest soybean export market for the United States.

A model farm which will be fashioned after the Kimberleys' one is set to be built next year in north China's Hebei Province, a sister province of Iowa.

"China-U.S. relations are not only about the government-level exchanges, but more importantly lie in the exchanges between people from the two countries. The close people-to-people exchanges could further contribute to the development of bilateral relations," said Zhao after visiting the Kimberleys' farm.

According to a report released by the U.S.-China Business Council, the U.S.-China trade relationship actually supports roughly 2.6 million jobs in the United States across a range of industries.

As the Chinese economy transits into the modern age, there is ample reason to believe U.S. exports can grow even more rapidly, and U.S. firms can harvest significant revenues from their investments, said the report.