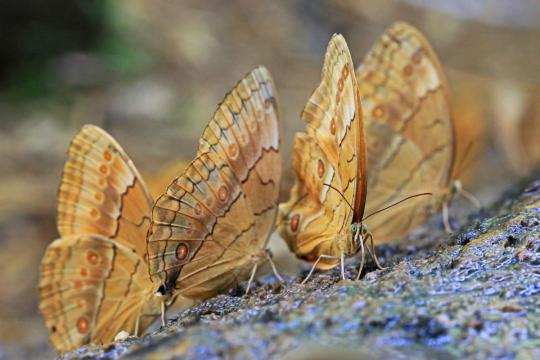 Countless numbers of caterpillars will emerge from their cocoons as butterflies later this month in what's known as Butterfly Valley in Honghe Hani and Yi autonomous prefecture in Yunnan province.

Experts expect to see the emergence of five major waves of butterflies between May 25 and June 10, with the total number expected to be around 150 million.

"With temperatures rising, every May sees a massive surge of butterflies in Honghe," said Yang Zhenwen, head of the butterfly museum in the valley.

During the surge, along the paths in the valley, on trees and rocks, hundreds even thousands of Stichophthalma louisa, also known as the jungle queen, suddenly go airborne.

"There are more butterfly pupa and caterpillars this year than before, so we estimate this year's surge will be the most spectacular in 10 years," Yang said.

Three times each year, Yang and his colleagues will check the number and condition of caterpillars in the valley to ascertain their estimates.

"A large-scale surge in the butterfly population is expected every six or seven years," Yang said. "The improved ecological environment and higher temperatures last year were the main reasons behind this year's massive phenomenon."

Butterfly Valley, which is in Jinping county, neighboring Laos and Myanmar, was discovered by Chinese scientists in 2009. By 2020, more than 400 species of butterflies had been found there. Warm temperatures, abundant forests and plenty of water provide food and habitat for butterflies, making Honghe a sort of butterfly oasis.

This biological phenomenon of a major butterfly surge is only seen in China and Mexico. The species in China is mainly the jungle queen. Other species include Neorina patria, Kallima inachus and Meandrusa sciron.

The phenomenon also generates hot discussions on social media. Many netizens express their amazement over the healthy ecology in Yunnan. Others are eager to gently pet the soft caterpillars.

In 2019, 160,000 tourists came to Jinping for the spectacle, but last year, due to COVID-19, the number dropped to 110,000. The growing number of tourists this year has helped the rental car and lodging sectors.

Xiao also warned that when interacting with large numbers of butterflies, tourists need to wash their hands after touching the insects.