When the May Fourth Movement swept through China in 1919, numerous scholars dedicated themselves to introducing Western culture to the country. As the home base of many experienced translators and publishing houses, Shanghai soon became a major center for studying Western culture and the English language.

In keeping with the city's history, a new exhibition, Where Great Writers Gather: Treasures of the British Library, kicked off on March 15 in Shanghai to commemorate the historical movement when China opened its arms to the West in earnest. 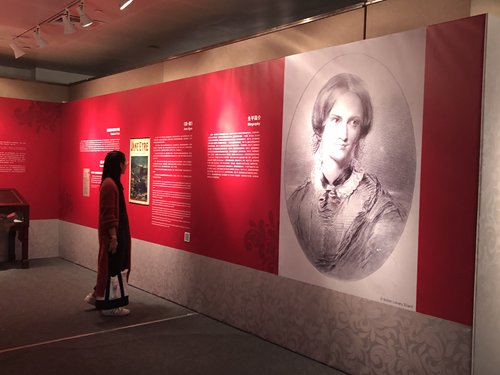 A visitor reads an introduction to Charlotte Brontë at the Where Great Writers Gather: Treasures of the British Library exhibition at the Shanghai Library. (Photo: Chen Shasha/GT)

The exhibition at the Shanghai Library displays letters and drafts by famous British writers such as Charlotte Brontë, D.H. Lawrence, Percy Bysshe Shelley, T.S. Eliot and Charles Dickens alongside Chinese translations, adaptations and treaties on their works.

Some of the displays allow visitors to get a clear view of some of the more famous chapters and lines from major works such as Charlotte Brontë's classic line "Reader - I married him" from Jane Eyre, drafts of poems from T.S. Eliot's Old Possum's Book of Practical Cats and letters by the famed poet discussing feline behavior and five pages from the original manuscript of The Pickwick Papers by Charles Dickens.

To offer a panoptic view of the historic changes that were taking place in China during 1919, the Shanghai Library is also providing a group of manuscripts that shed further light on the exchanges that were occurring between the East and the West at the time. One of these, a manuscript presented by George Bernard Shaw to Shanghai dramatist Huang Zuolin in 1937, reads, "Rise up, China! You are the future of the eastern world."

Additionally, the exhibition also includes the earliest English novel translated into Chinese (Jonathan Swift's Gulliver's Travels, published as Tan Ying Xiao Lu, literally Notes on Countries Overseas, in 1872), English books used by the famous translator Tu An while he was undertaking the first Chinese translation of Shakespeare's Sonnets in Shanghai and a signed limited first edition of Lady Chatterley's Lover.

Shanghai is the latest stop for the exhibition, after the National Library of China in Beijing and the Mu Xin Art Museum in Wuzhen, Zhejiang Province, as it continues its tour as part of the cultural exchange program The British Library in China: Connecting through Culture and Learning. Seeing more than 41,000 visitors between October 2017 and January 2018, the exhibition was warmly welcomed in Wuzhen.

Noticing the exhibition hall was filled with visitors, Alexandra Ault, the British curator of the exhibition, expressed her feelings, "Nothing matches the thrill of seeing first-hand original manuscripts; from Charlotte Brontë's scrupulously neat fair copy to Charles Dickens' hurried and rather messy draft pages, they reveal the many different ways in which writers create. It has been a pleasure to work with my colleagues at the Shanghai Library to develop an exhibition that will showcase authors and poets familiar to millions of readers in China."

The success of the exhibition has also been a source of great delight for the Chinese team involved.

Chen Chao, director of the Shanghai Library, told media, "It gives me a great pleasure to host this exhibition presenting literary treasures in Shanghai. This is not just a high-level cultural exchange event between China and the UK and the first in-depth cooperation between the Shanghai Library and the British Library, but also a spiritual interaction between the people of both countries."

The British Library is considered by many to be one of the world's greatest research libraries since it boasts a broad range of reference materials that have proved extremely useful to the academic, business, research and scientific communities. In addition, the database at the British Museum is also unparalleled. Containing materials dating back to more than 250 years ago, the Library's research database covers more than 150 million separate items, including books, journals, manuscripts, maps, stamps, music, patents, photographs, newspapers and sound recordings in a wide range of written and spoken languages.