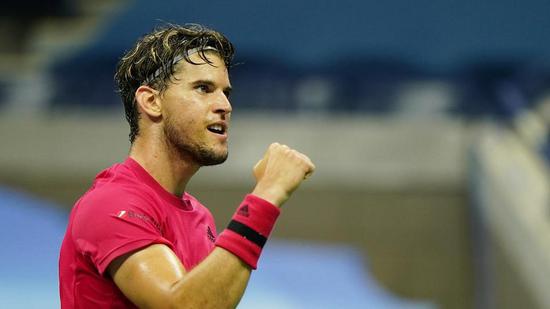 Dominic Thiem in action against Alexander Zverev during a men's singles final match at the 2020 US Open on Sept. 13, 2020. (Darren Carroll/USTA via Xinhua)

Second seed Dominic Thiem of Austria came back from two sets down to overcome German fifth seed Alexander Zverev 2-6, 4-6, 6-4, 6-3, 7-6(6) in the US Open men's singles final for his maiden Grand Slam title on Sunday.

This was the first US Open final to be decided by a fifth-set tie-break, while Thiem became the first player in the Open Era to rally from two sets down in a US Open final.

"We started to know each other back in 2014 and straight away started to develop a great friendship and then a great rivalry," Thiem said of his close friend Zverev. "We've made great things happen on the court and off the court. It's amazing how far our journey brought us to share this moment. I wish we could have two winners today. We both deserved it."

The title is the 27-year-old Thiem's first Grand Slam trophy after three previous defeats in finals of tennis majors.

Thiem was runner-up at the Australian Open earlier this year and also lost in the French Open finals in 2018 and 2019.

Zverev, 23, was in top form in the first set as he displayed an impressive serve and volley game to triumph 6-2 in just 30 minutes.

In the second set, Zverev was still the one that called the shots, storming to a 5-1 lead after breaking twice. Thiem broke back once, but the German held his own serve to take the set 6-4.

But in the third and fourth sets, Zverev's play became sloppy while Thiem started to gain momentum and applied more pressure to Zverev's serve. The Austrian star finally got back into the match after taking the two sets and evened the gap.

As the match moved deep into the fifth set, it became more about mental fortitude than technical skill. Zverev fought through nerves by moving forward and was rewarded by breaking Thiem at 4-3 with an aggressive forehand.

But he tightened up again when it came time to serve for the championship, allowing Thiem to break back.

Thiem then found himself 6-5 ahead and it was his turn to serve for the championship. However, like Zverev moments earlier, Thiem failed to clinch the match and it went to a tie-break.

After squandering two championship points, Thiem won the title on his third after Zverev hit it wide.

"I was super close to being a grand slam champion. I was a few games away, maybe a few points away. For me what upset me the most is not the third set or something like that, it's the fifth set. I had a lot of chances in the fifth set and didn't use them," said a disappointed Zverev, who was contesting his first career major final.

"I'm 23 years old. I don't think it's my last chance. I do believe that I will be a Grand Slam champion at some point," he added.