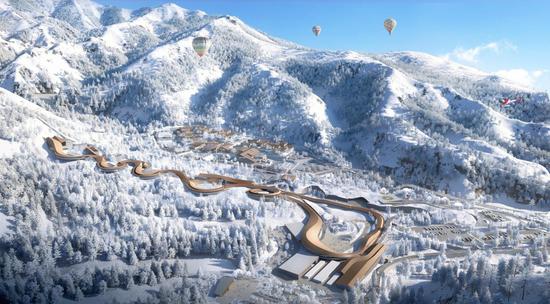 Photo taken on March 4, 2020 shows a rendering of the National Sliding Center for 2022 Winter Olympic Games in Beijing, China. (Xinhua)

"We heard a very encouraging technical report from the Coordination Commission who informed us the technical preparations are on track and going very well," the IOC president said in a video conference after the IOC Executive Board meeting on Wednesday.

In regard to the COVID-19 pandemic, Samaranch reported that Beijing 2022 has been in direct contact with the relevant International Federations, developing plans for different scenarios at a number of official test events this coming winter based on the latest COVID-19 situation.

Bach also said the progress in rapid testing and development of a vaccine could be "greatly influential".

"We have also made contact with COC to benefit from the expertise of the developers of Chinese pharmaceutical companies to see and learn about the progress there. These will of course not only influence hopefully the preparations for Tokyo, but also for Beijing," Bach added.

For the Tokyo Olympic Games, Bach repeated that the local organizers and the IOC are preparing for multiple scenarios for the Games next year, but it was not time to specify the plan.

"It's just too early to give a concrete answer what will be the final scenario," Bach said, "The only thing we can say is it will be about offering a safe environment for all participants."