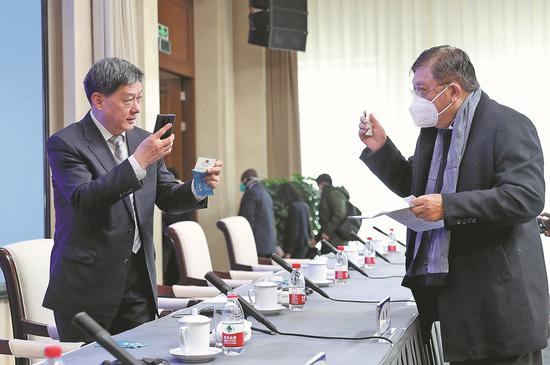 Jean-Louis Robinson (right), ambassador of Madagascar to China, exchanges business cards with Liu Qingquan, president of the Beijing Hospital of Traditional Chinese Medicine, after a policy briefing in Beijing on Friday. (Photo by Zou Hong/China Daily)

China has been recording and sharing COVID-19 epidemic information consistently and has deployed extensive tools to monitor viral mutations as its virus control work enters a new phase, officials and experts said on Friday.

As China is set to downgrade management of the novel coronavirus infection from Class A to Class B, Wu Zunyou, chief epidemiologist at the Chinese Center for Disease Control and Prevention, said that the country has formulated a comprehensive plan to keep track of the scale of domestic infections.

"The direct contagious disease reporting system of the China CDC will still function as the pillar of disease surveillance, and hospitals are required to report infections at all times," he said, adding that the 500-plus surveillance stations for influenza flu will also be utilized to assess the spread of the virus.

Elderly care homes, schools and other key venues will continue to roll out tests, while tests on the environment and waterways will also be stepped up to expand sources of information, Wu said during a briefing on China's COVID-19 control policy held exclusively for foreign diplomatic envoys based in China.

The event was held in Beijing by the National Health Commission and the International Department of the Central Committee of the Communist Party of China. Senior diplomats from over 130 countries attended the briefing.

Wu said that during the initial outbreak that hit Wuhan, Hubei province the hardest, China established diagnostic standards and reporting protocols for the disease from scratch. Later, it relied on large-scale testing to accurately count infection numbers.

With the launch of optimized antivirus control measures in recent months, nucleic acid testing has been reduced and quick antigen tests and home-based treatment are promoted, resulting in a period of discrepancies in official data and observations of the public.

However, Wu said that COVID-19 disease reporting has been recalibrated onto a "stable" path.

In the past three years, China has also isolated genome sequencing of key variants, studied their infectiousness, pathogenicity, immunity evasiveness and other characteristics, as well as shared findings with the international community.

As the rise of infections on the mainland has stoked concerns over the emergence of new variants, Wu said that China has set up multiple systems and databases to enhance monitoring.

"So far, all strains detected domestically can be found on GISAID (a global platform compiling genomic data of influenza viruses and coronaviruses)" he said.

"We are also closely watching and monitoring novel mutations and will report them via different channels, including the GISAID platform."

He added that a massive domestic database has also been set up to facilitate exchange of genomic information.

Mi Feng, spokesman of the commission, said that Chinese authorities held a technical meeting with the World Health Organization on Thursday evening — the third such event in about a month — and discussed the latest epidemic situation, surveillance of variants, vaccination coverage and intensive care capacity for severe cases with international experts.

No emerging strains containing significant alterations to known variants have been detected in China, he added.

Meanwhile, China has provided anti-virus materials to over 130 countries and 15 international organizations and supplied 2.2 billion COVID-19 vaccines overseas. The country has also held more than 300 events to spread its experiences on disease control and dispatched expert teams to more than 30 countries.

Besides continuous assessments of the epidemic situation and viral mutations, experts said expanding healthcare capacity and protecting vulnerable groups are some of the priority tasks following optimization of virus control strategy.

Jiao Yahui, head of the commission's medical administration bureau, said that the number of fever clinics or checkpoints across the country has risen to nearly 57,000.

She added that grassroots institutions have also completed surveying and assigning risk labels for 190 million people aged 65 and above.