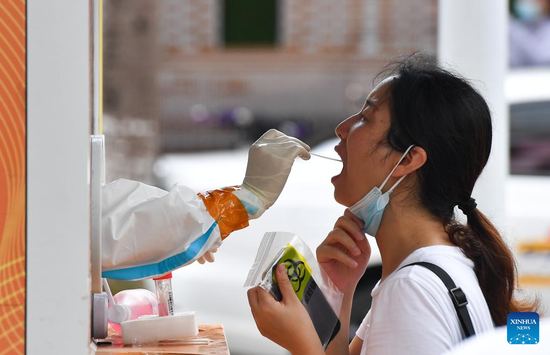 Hainan began conducting nucleic acid tests for all people in the tropical island province on Sunday to curb its latest COVID-19 outbreak, which has spilled over into 10 cities and counties across the island, said local officials at a news conference held in Haikou on Sunday afternoon.

With the first confirmed new case of COVID-19 detected in Sanya on Aug 1, from there the outbreak has spread across Hainan. The total confirmed locally transmitted cases and asymptomatic carriers had reached 827 and 313 respectively as of midday on Sunday, according to the Hainan Provincial Health Commission.

The outbreak is rapidly developing in communities and newly infected cases are increasingly found among people already placed in closed-loop management. So far there are no severe or critical cases while the symptoms of those infected are only mild, officials said at the news conference.

The virus is the Omicron BA.5.1.3 variant, and it is the first time this variant has been detected on the Chinese mainland. Experts believe the origin of the virus either came from contaminated imported seafood at the Yazhou fishing port in Sanya, or from Hainan merchants who were most likely infected during transactions with merchants from overseas, local officials said.

Sanya, a renowned tourist city, reported 689 confirmed locally transmitted cases and 282 asymptomatic carriers from Monday to 12 am on Sunday, according to the local COVID-19 epidemic prevention and control headquarters.

Travelers who are currently in Sanya, or have a travel history that includes Sanya since July 23, will have to stay in Hainan for another seven days starting from Saturday for assessment via nucleic acid tests, local officials said.

About 32,000 tourists are currently stranded at hotels in the resort city. The costs for their stays at the local hotels will be cut by half. The local government as well as the tourism sector will do their best to ensure good and comfortable services for the tourists and protect their rights and interests.

On Sunday, the Sanya Phoenix International Airport canceled all inbound and outbound flights to curb the new COVID-19 outbreak from spilling over into other areas. The selling of tickets for high-speed trains in Hainan has also been suspended for passengers wanting to leave Sanya.

Flights at Haikou Meilan International Airport remain normal but under strict epidemic prevention and control measures, according to the airport administration.

"The city's major epidemic control and prevention risks are from outside of the capital due to ongoing outbreaks in other provinces and increasing tourism during the summer vacation," said Liu Xiaofeng, deputy director of the Beijing Center for Disease Prevention and Control, at a news conference on Sunday afternoon.

He said residents who have been to Hainan since July 23 should report to their residential communities, hotels or workplaces so that epidemic prevention measures can be undertaken accordingly.