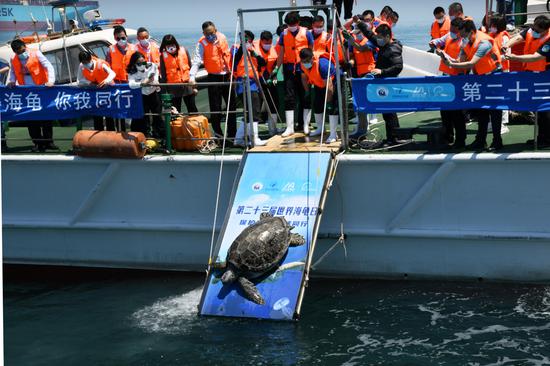 Volunteers release a turtle into the sea in Qingdao, Shandong province, on Monday, which was the 23rd World Turtle Day. Five recently rescued sea turtles were released that day. (LI ZIHUAN/XINHUA)

So far, the national key wildlife protection rate has risen to 74 percent, up from 71 percent last year, the administration said.

Its announcement took place on Sunday to coincide with the International Day for Biological Diversity, the theme of which this year was "Building a shared future for all life".

The administration said that China's achievements in protecting wild animals can partly be attributed to releasing wild species into nature reserves after artificial breeding.

It said that nine milu deer fawns were recently born in the Daqingshan National Nature Reserve in the Inner Mongolia autonomous region.

The fawns are offspring of milu deer, or Pere David's deer, released into the wild in September following artificial breeding in Beijing and Jiangsu province.

"This result showed that the group of deer safely spent three seasons in a wild environment that has an alpine climate. Close monitoring and health management by researchers led to the successful reintroduction of the deer to the wild," the administration said.

According to the administration, artificial breeding has helped to boost the population of some species that had previously disappeared in the wild, such as milu deer, which now number around 10,000, and Przewalski's horses, of which there are now around 700.

As for other wild populations, the giant panda population has increased from 1,114 in the 1980s to 1,864, while the number of wild Asian elephants increased from about 180 to 300 over the same period. Meanwhile, the population of wild Tibetan antelopes has risen to more than 300,000 from about 60,000 in the late 1990s.

The administration said the country has built 200 botanical gardens to preserve more than 20,000 species of plants, accounting for about 66 percent of the country's flora.

So far, 206 species of rare and endangered plants have returned to the wild, of which 112 are unique to China.

Meanwhile, the crackdown on illegal trading in wildlife－including a complete ban on trading in ivory, rhinoceros and tiger bones－has been enhanced by improved enforcement.