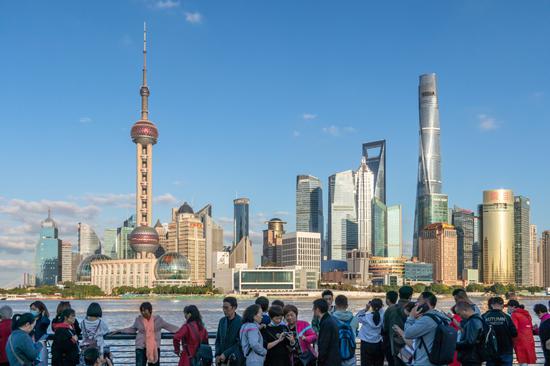 Tourists gather at the downtown area of Shanghai. (Photo for China Daily/Wang Gang)

Although Ang doesn't live in Shanghai, he will be able to enjoy benefits and conveniences in area such as education, housing and healthcare which were previously available only to Shanghai residents.

Working as the general manager of Suzhou Walter Electronic Co, Ang often goes on business trips to Shanghai and other cities in the delta, which is one of the nation's economic powerhouses with highly integrated industrial chains.

"It will make my trip in Shanghai faster when I get the license plate as some roads and expressways restrict vehicles from other places," Ang said during an interview with local media Ajmide FM.

Allowing foreign talents working in the demonstration zone of the integration of Yangtze River Delta to apply for Shanghai's residence card is one of the latest policy innovations of the local government to boost mobility of foreign talents in the region.

"I think this is a very good policy and it can attract more foreigners to work and live in the region," Ang said.

Currently, the pilot policy is being tested only in the demonstration zone, which includes Wujiang district of Suzhou in Jiangsu province, Jiashan county in Zhejiang province, and Qingpu district in Shanghai.

Eligible foreigners are those who have a bachelor's degree, or possess special talents and are legally working or running a business in the zone, according to Shanghai municipal human resources and social security bureau.

Zhu Lian, officer with the bureau's office in Qingpu district, said applicants need to first consult with and have their materials checked by local human resources service centers in Wujiang and Jiashan before applying at the center in Qingpu.

The whole application process takes about a month.

"The card holder will experience conveniences in nine areas, for example, they can join Shanghai's municipal healthcare program, apply for reminbi credit card in Shanghai, and their children can go to public school in the city," Zhu said.

The launch of the pilot policy involved coordination between different departments across the two provinces and Shanghai. The executive committee of the demonstration zone played a crucial role in pushing forward the policy in different administrative bodies.

"There was no precedents for this sort of policies, and we spent three months last year coordinating with different human resource bureaus," said Shen Wenhua, an official responsible for business environment of the executive committee.

"We have been making plans for the next five years to bring down more barriers that hinder the mobility of talents in the zone and hope what we've done can be applied to the whole delta region in the future."