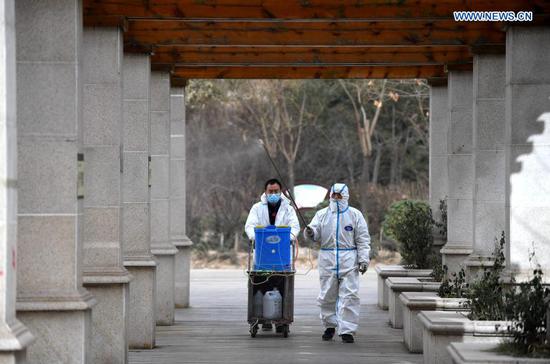 Staff members spray disinfectant at a community which was classified as a medium-risk area for COVID-19, in Yuhua district of Shijiazhuang, North China's Hebei province, Jan 12, 2021. (Photo/Xinhua)

It is highly unlikely that China will experience a major resurgence of the novel coronavirus during the upcoming Spring Festival, given that the nation has created containment measures to quickly identify, isolate and control any possible outbreaks, a health official said on Wednesday.

Feng Zijian, deputy director of the Chinese Center for Disease Control and Prevention, said the center has gained more understanding of the novel coronavirus in the fight against the epidemic during more than a year.

Large population movements and concentrations during Spring Festival, the top traditional time for family reunions, and the increasing number of parcels being delivered, especially imported cold-chain goods, will add to the risks of COVID-19 infection.

However, as long as epidemic containment measures are strictly implemented, there will not be a large resurgence of the COVID-19 epidemic, he said at a news conference held by the Joint Prevention and Control Mechanism of the State Council.

Wang Bin, an official at the National Health Commission's disease prevention and control bureau, said: "We advise people not to travel during the Spring Festival holidays unless absolutely necessary."

The country is likely to face a "major test" in containing the epidemic during this year's Spring Festival travel rush, which begins on Jan 28 and ends on March 8, she said.

Every sector of society, including local governments, high-risk areas such as airports and ports as well as individuals, should strictly enforce epidemic control measures to deal with the increased risks, she said.

Hebei province reported 90 new confirmed COVID-19 cases and 15 asymptomatic carriers on Tuesday, the provincial health commission said on Wednesday. It was the highest daily increase in confirmed cases in the province since the cluster infection broke out on Jan 2.

Among them were people who had been at gatherings such as weddings and children, including a 6-month-old baby.

After reporting new cases for 11 consecutive days since Jan 2, Hebei had a total of 395 recently confirmed COVID-19 patients and 215 asymptomatic carriers as of the end of the day on Tuesday, according to the provincial health commission. Most of the cases are in Shijiazhuang, the provincial capital.

Feng said the recent outbreak in Shijiazhuang will be contained in no time as long as the containment measures are promptly and decisively implemented.

The city has limited the movement of people and conducted nucleic acid tests on all residents to curb the spread of the disease. While a certain amount of new cases are reported every day, they are all from people under observation, he said.

Other regions have increased the tracing of people who have arrived from the city since Dec 15, helping curb the further spread of the outbreak, Feng said.

Heilongjiang declared a state of emergency on Tuesday and as of Wednesday afternoon, the province had reported 57 confirmed cases since Sunday.

Wang said that despite the recent outbreaks in different parts of the country, the overall epidemic situation in China is under control.

The country has been facing great pressure in containing the pandemic as respiratory viruses such as the novel coronavirus are likely to circulate faster during the winter and the wide spread of the virus overseas also has created unprecedented pressure to prevent imported transmissions, she said.

"Meanwhile, we have intensified testing and disinfection of cold-chain imports and transportation vehicles involved in shipping them," she said. "Cold-chain workers are also required to take regular nucleic acid tests."

In response to the rising number of domestic infections, Wang said a vital step is to conduct regular tests on people considered at higher risk of contracting the virus, in order to identify new infections as soon as possible.