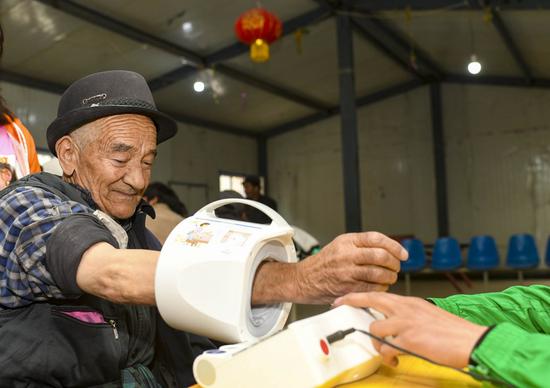 A villager has his blood pressure measured at the clinic of Yaragzi Village in Xihxu Township in Yecheng County, northwest China's Xinjiang Uygur Autonomous Region, May 2, 2020. (Xinhua/Hu Huhu)

Assistance by professionals from tertiary hospitals across China has helped health institutions in the country's remote regions of Tibet and Xinjiang improve their service capacity and management, contributing to poverty alleviation and improvement in the health of locals, a government official said Tuesday.

In each of the last five years, around 900 experts from tertiary hospitals were involved in the campaign to support hospitals in Tibet Autonomous Region, Xinjiang Uygur Autonomous Region, and the Xinjiang Production and Construction Corps, said Mi Feng, an official with the National Health Commission (NHC).

Addressing a press conference on the health sector's assistance in poverty alleviation efforts during the 13th Five-Year Plan period (2016-2020), Mi said health institutions that had received support included hospitals based in 106 impoverished counties.

With the financial support of the central authorities, 16 major recipient hospitals in Tibet and Xinjiang have witnessed the opening of 288 new departments, an additional 4,390 hospital beds and the installation of 1,168 sets of medical equipment during the five-year period, said Li Dachuan, also an official with the NHC.

Li added that the experts coming to help from peer provincial-level regions helped medical professionals in Tibet and Xinjiang improve their expertise through mentoring and training programs.

Thanks to the efforts, medical services have been greatly improved in the two autonomous regions, Li said, noting that treatments for more than 400 major diseases are now available at hospitals in Tibet, while 50 percent of county-level hospitals across Xinjiang are now capable of performing complicated surgeries like those for brain tumors and cervical spine diseases.

The average life expectancies in Tibet and Xinjiang have risen to 70.6 years and 74.4 years, respectively, Li added.

The autonomous regions have also witnessed significant improvements in key health indicators over the last five years, including the infant and child mortality rates, the maternal mortality rate and the hospital delivery rate, Li said.

China has a three-tier system to grade hospitals, with tertiary hospitals -- which have the largest number of beds and provide comprehensive medical services -- at the top of the list.