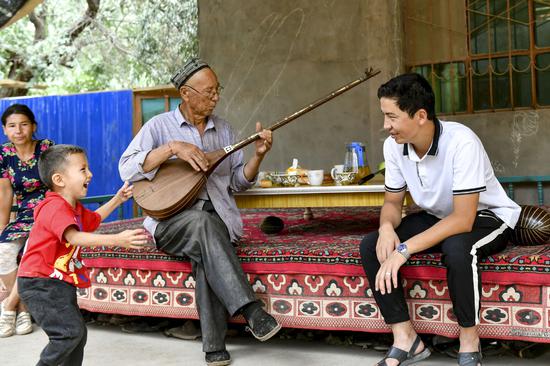 Xinjiang's Uygur population has increased under the law-based implementation of the family planning policy, with all rights of ethnic minorities including those of Uygurs protected, a Xinjiang official told a news conference on Saturday.

The remarks came after a German scholar Adrian Zenz recently published a report which claimed that Xinjiang was using forced sterilization and coercive family planning against Uyghurs and other minorities in Xinjiang in a attempt to limit their population.

Tursunay Abdurehim, an official from the Statistics Bureau of Xinjiang Uygur autonomous region, said the report was biased, used wrong data and cited fake cases and its findings were against academic research methodologies and the realities in Xinjiang.

According to her, from 2010 to 2018, the birth rate and natural growth rate of Xinjiang's population recorded a slight decline.

According to her, the decline of Xinjiang's population growth in 2018 is the result of full implementation of family planning policy, which also reflects economic and social development and the changing patterns of people's reproduction attitude among all ethnic groups.

Tursunay said, "Adrian Zenz is keen on making up lies on Xinjiang affairs and slandering China. His earlier reports and remarks have been proven to be false."

"This time he repeatedly ignored the truths and facts on the patterns and realities of Xinjiang's population development, deliberately made up lies by saying 'Xinjiang is suppressing ethnic minorities' population growth'," she said.

"He followed the orders from his 'American master', interfering with China's internal affairs, disturbing Xinjiang's development and order by fabricating 'human rights issues' via Xinjiang's population related issues," she added.

As for the women such as Zamira Dawut, Mihrigul Tursun, and Tursunay Zinavdin mentioned in the report, who allegedly suffered "unlawful detention" and were forced to take compulsory sterilization by government, Ilijan Anayt, spokesman for the regional government, said Adrian Zenz played tricks by inviting these "actresses" to beef up his lies.

"The 'actresses' gave their 'performances' in 80 percent of Xinjiang related hypes and obeyed the orders of the 'backstage directors', making up new 'lines' every time, Ilijan said, adding that "The reports that are related to those 'actresses' are all fake news."