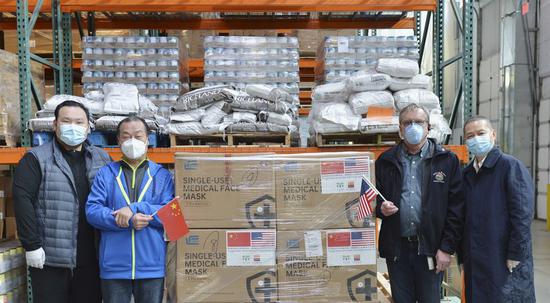 Photo taken on April 27, 2020 shows people posing for a photo with the face masks donated by China's Fujian Province in Oregon, the United States. (Xinhua)

China has provided the United States with over 26.5 billion face masks and other medical supplies, and hopes that the United States can overcome the COVID-19 epidemic at an early date, Foreign Ministry spokesperson Wang Wenbin said on Friday.

An epidemic, knowing no boundaries or races, is the common enemy of humanity. Solidarity and cooperation can be the most powerful weapons against the virus, and the most urgent task is to save lives, according to Wang.

With sympathy and empathy, China has offered substantial assistance to the epidemic-stricken United States in terms of anti-virus supplies, and has supported and facilitated U.S. procurement of medical supplies in China, Wang said at a press briefing in response to comments made by U.S. Ambassador to China Terry Branstad on Thursday.

During his trip to Shanghai, Branstad reportedly said that China's medical supplies to the United States had saved many lives. He also expressed the hope for further exchanges and cooperation with China to jointly overcome the impact of the epidemic.

According to Wang, as of Aug. 2, China had provided the United States with over 26.5 billion face masks, 330 million protective gowns, 31 million goggles, 610 million pairs of surgical gloves, and 11,500 ventilators.

"We hope that the U.S. can overcome the COVID-19 epidemic at an early date." Meanwhile, a small number of U.S. politicians should stop politicizing and stigmatizing the COVID-19 issues, stop shifting the blame to China, and work with the international community to overcome the impact of the epidemic, Wang said.