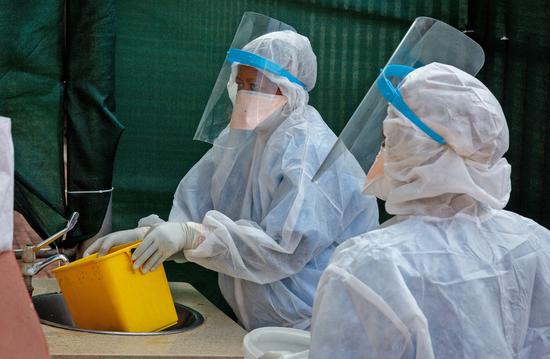 With one of the highest number of confirmed COVID-19 cases in the world, and accounting for about half of the cases in Africa, South Africa is reeling under the pandemic but still fights unswervingly.

The pandemic and the resultant lockdown, enforced in late March, has led to a recession with severe contraction of the economy, accompanied by big job losses and business closures with high levels of social hardship.

Although confirmed cases continued to surge, the government had to ease the lockdown restrictions gradually for the sake of livelihood.

With the economy hard hit by the still surging pandemic, prospects for economic prospects remain dim. The GDP deficit forecasts vary from a reduction of 7.5 percent to 8.2 percent, depending on how the virus continues to affect the country.

Among all the sectors, small businesses have been most impacted by the pandemic.

Mari Verwey, a salon owner and married mother of three-year-old twins in Cape Town, said that her salon was closed for three months without any income.

Wanda Steyn, the owner manager of a fast food takeaway, said he thought the government strategy was well thought out, but it did not work well in some aspects.

Over 4.4 million people have now received the special COVID-19 grant, which assists those who are unemployed and do not receive other forms of support. So far, about 132 million U.S. dollars had been paid out to these recipients.

The package also provides assistance to companies in distress and seeks to protect jobs by supporting workers' wages.

Astrid Khumalo, an unemployed mother of two, said she appreciated what the government was doing at such a critical time when finding work was even more difficult.

Providing food parcels and a small financial grant was essential to preserving her and millions of others livelihood in these desperate time, Khumalo said, commending the government for taking into consideration the plight of the poor.

Some experts are of the opinion that to get the economy moving again in the latter part of the year as well as into 2021, there is going to be a need to face the short-term challenges of an economy that is staggering under the effects of no profits and a hammering in employment and fiscal revenues.