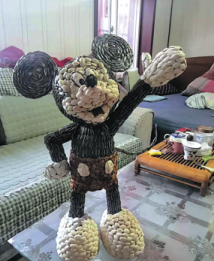 In addition to online games, demand has risen for video apps as sources of entertainment and information.

With movie theaters nationwide closed due to the outbreak, on Jan 24, Lost in Russia became the first Chinese film intended for theatrical release to premiere online. It debuted for free on Huanxi Media's streaming service and on platforms owned by ByteDance.

Directed by and starring Xu Zheng, the comedy was due to be released in theaters on Jan 25. It portrays the journey through Russia of a manipulative mother and her middle-aged son who wants to rebel and escape her smothering influence.

According to a stock exchange filing, ByteDance has agreed to pay Huanxi Media 630 million yuan to stream the movie and to later jointly launch a film channel.

Data from App Annie show that weekly downloads on ByteDance's Xigua video app rose by 77 percent from Jan 20 to Jan 26.

According to digital marketing agency Techweb, in the three days after it debuted, Lost in Russia notched up some 600 million views and was watched by more than 180 million households.

Many viewers commented: "Thank you very much, I owe you a movie ticket."

ByteDance has been streaming longer content, with the addition of 13 movies from Huanxi Media across its platforms.

Enter the Fat Dragon was the second film after Lost in Russia to be released on streaming platforms during Spring Festival, debuting on Feb 1.

The movie has been viewed more than 40 million times on Tencent Video.

Although people confined to home have embraced online streaming, theater owners and studios have voiced concern that the trend could have a significant impact on China's film sector. They said this could be comparable to the "disruption" brought to Hollywood by Netflix, which has resulted in new productions skipping theatrical release and going straight to streaming.

Many universities and other academic institutions have been livestreaming lessons, while video apps, such as Bilibili, Kuaishou and Douyin, plan to offer a range of classes to the public.

An open lecture given on Feb 5 by Yan Xuetong, director of The Institute of International Studies at Tsinghua University, attracted about 160,000 viewers. Since the novel coronavirus outbreak, Yan has analyzed reaction from the international community.

Coronavirus-related searches and hashtags have topped trending lists on Douyin and Kuaishou. Both apps have launched channels devoted to virus-related news, live updates and expert analysis.

Xie Bin, an expert at the Shanghai Mental Health Center, suggested that people should avoid searching for information about the virus, which could increase their anxiety levels.