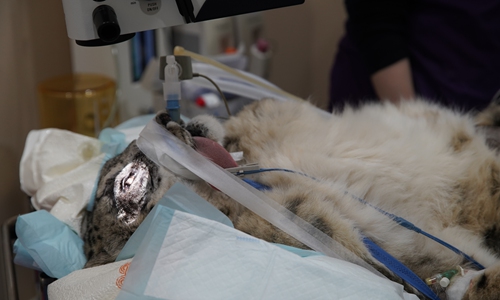 Linghan, an older snow leopard, was recovering from the cataract surgery on his right eye at the Qinghai-Tibet Plateau Wildlife Zoo (Xining Zoo) on Tuesday morning, according to the statement from zoo officials sent to the Global Times on Wednesday.

Linghan was anesthetized on Tuesday morning and went into surgery at 11:45 am.

An intraocular lens was implanted in his right eye after the cataract was removed.

Jin Yipeng, vice president at the College of Veterinary Medicine, China Agricultural University, and his team performed the surgery.

Jin said the procedure went smoothly and explained that Linghan's recovery will depend on the animal's condition but was "cautiously optimistic."

The procedure marked the first cataract surgery performed on a snow leopard not only in China, but worldwide, according to the official zoo statement.

"The surgery will not only improve Linghan's living quality, but also provide experience in rescuing other wild animals," the statement also said.

Linghan was injured when first rescued from the wild in Qinghai's Yushu Tibetan Autonomous Prefecture in January and was sent to the Xining Zoo.

After the snow leopard was examined, experts learned that Linghan was 11 years old, roughly the maximum age for the species.