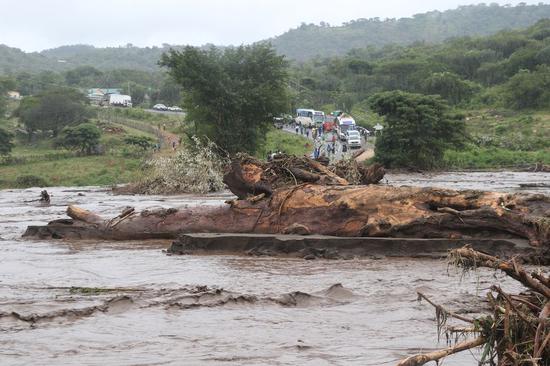 The death toll from landslides that struck villages in Kenya's northwestern county of West Pokot last Friday after heavy downpour has reached 52, officials said on Monday.

He said there is a possibility of a rise in the number of casualties as the search and rescue for the missing victims of the landslide intensifies.

The governor said that both the national and county governments were coordinating efforts to provide emergency aid to victims of massive landslides that tore through hillsides in the county.

"It is with great sadness that I learned of the lives lost after landslides following heavy downpours in West Pokot County in Kenya." The African Union Commission Chairperson expressed his deep sadness.

Kenya Red Cross Society said on Monday it had scaled up emergency support for communities affected by flooding and landslides in the wake of heavy rainfall pounding many parts of the country.

"We are worried about families that have been cut off from lifesaving support. They are without food, water and may require medical care," said Asha Mohammed, secretary general designate at Kenya Red Cross Society.

"Our teams are doing everything they can to reach these areas, including using boats and treading deep waters to evacuate families in high-risk areas, conducting search and rescue efforts and providing basic health services," she added.

Mohamed warned that flooding that might intensify in the coming days, will lead to loss of crops, livestock and property among communities in Kenya's semi-arid counties. The floods could also trigger an outbreak of diseases like malaria and cholera.

According to Kenya's Meteorological Department, the above-normal rains are expected to subside in December.