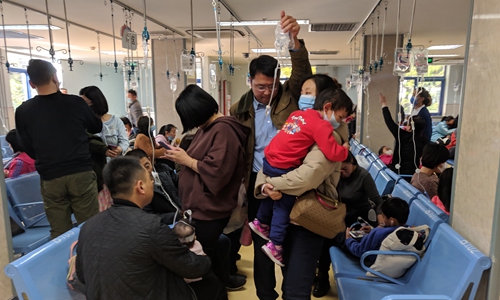 No new patients have been infected by the pneumonic plague in Beijing, said the Beijing Health Commission late Thursday, after authorities ruled out two suspicious cases at Beijing Children's Hospital and Xuanwu Hospital, determining they were not related to the infectious disease.

The two patients previously infected with the pneumonic plague and being treated in Beijing is in stable condition while the other is in a critical condition, the commission said.  And 11 experts have formed a consultation group to instruct the treatment, the commission said in a previous statement of the day.

The city has isolated the patients and sanitized areas where they were treated, according to the commission.

Two patients from North China 's Inner Mongolia were confirmed with pneumonic plague on Tuesday after they were transferred to Chaoyang Hospital in Beijing, causing panic among some residents in the capital.

Online rumors said a patient in Beijing Children's Hospital was confirmed having the deadly and highly infectious disease. Rumors also said the fourth floor and basement level one at the hospital were sealed off.

Beijing Children's Hospital on Thursday denied the rumors that spread widely on social media platforms such as the twitter-like Sina Weibo from Thursday morning.

A medical staff member at the outpatient consultation desk twice confirmed to a Global Times reporter  that no patient they treated was confirmed with plague.

The Global Times reporter also found the fourth floor and basement level one was functioning as usual with people walking around. There was no space sealed off in the hospital.

The medical staff member also denied that the hospital was partly sealed in the morning due to the infectious disease.

A medical industry insider, who requested anonymity, told the Global Times that people visiting the hospital might have mistaken a temporary closure of an area in the hospital for routine sanitation.

The plague has a short incubation period usually shorter than seven days, said Zhou Zijun, a professor at Peking University's School of Public Health in Beijing, noting that more cases would have broken out if the two patients had infected others considering they arrived more than 10 days ago.

Residents should not be too worried, he said.