Baby gets new heart in Wuhan 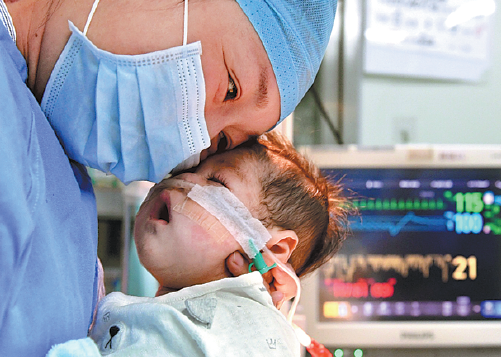 Asia's youngest and lightest heart recipient, identified as Ruirui, is held by her mother about three months after she received a transplanted heart in Wuhan, Hubei province. [Photo/for China Daily by Liu Kunwei]

Organ transplants involving infants are always considered challenging, given their stage of development and the severe shortage of matching donors, doctors say.

But a hospital in Wuhan, Hubei province, has advanced the boundaries of medicine by announcing on Thursday they had successfully transplanted the heart of a four-year-old donor into the body of a 66-day-old girl, the youngest such case known in Asia.

In the latest case, the infant girl, who was identified as Ruirui to protect her privacy, weighed only 3 kg at the time of the transplant in June — the lightest known heart recipient in Asia.

The operation put surgeons to the test because the procedure involved a challenging mismatch — the diameter of donor's aorta was roughly twice the size of the recipient's, according to Dong Nianguo, who led the surgical team.

"We also faced many challenges in the wake of the surgery," he said.

To facilitate the process, Dong said they had used surgical thread that would dissolve to suture the blood vessels. As the thread was absorbed by the body over time, it would leave room for the organ's growth. They also decided to close her chest little by little so that the oversized heart would gradually fit into recipient's body.

Doctors said that Ruirui, the recipient, is free of postoperative infection risks and is able to breathe without assistance following three months of intensive care.

Ruirui, from Shandong province, is still under close observation in the hospital's intensive care unit.

Her donor was a four-year-old boy who died after falling from a high-rise building in Guangzhou, Guangdong province, about a week before the transplant surgery. His parents agreed to donate his organs in the hope that their son, identified as Tongtong, would continue to live in another way, hospital officials said.

Ruirui's mother, who gave her name as Lin to preserve her privacy, said the girl is her third daughter. The other two are 9 and 11.

When Lin was five months pregnant, a test showed the fetus had aortic stenosis, a cardiac condition in which the aortic valve can fail to open completely. She gave birth in April, though had been cautioned during pregnancy that the baby might need surgery after birth.

One month later, Ruirui was diagnosed with a congenital heart defect. Her cardiac chambers had become bloated, swelling her heart to almost the size of a grown man's and causing breathing difficulties as the swelling organ pressed on her windpipes.

Her situation worsened over the next 10 days, and doctors said a transplant was the only option for her to survive.

Before the surgery, the mother talked to the family of the infant boy who had a successful heart transplant in 2014. "I was greatly inspired by his success story," Lin said, adding that they spoke for more than two hours on the phone when they first talked.