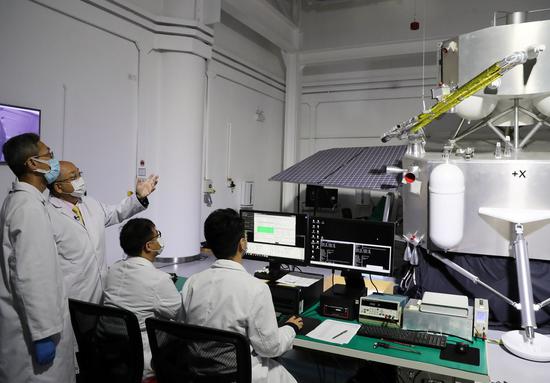 Professor Yung Kai-leung (L2) tests the "Surface Sampling and Packing System" for moon surface sampling with his team members at a lab of the Hong Kong Polytechnic University (PolyU) on Dec. 17, 2020. (Xinhua/Li Gang)

The Hong Kong Polytechnic University (PolyU) research team, which developed one of the key systems for China's first lunar sample return mission, has done more than 1,000 times of simulation to help complete the sampling, the team leader said on Thursday.

The return capsule of Chang'e-5 probe touched down on Earth early Thursday, bringing back China's first samples collected from the moon.

"Satisfied, excited, happy!" Yung Kai-leung, chair professor of Precision Engineering and associate head of Department of Industrial and Systems Engineering of PolyU, who led the research team, told the media that he stayed up until 3:00 a.m. local time on Thursday to witness the return.

Chang'e-5 probe adopts two methods of moon surface sampling, one uses a robotic arm for multiple-point surface sample collections, and the other is to drill underground.

The PolyU-developed system, the "Surface Sampling and Packing System," was developed in collaboration with the China Academy of Space Technology. The PolyU team was tasked in 2011 to develop the system for lunar surface sampling, packaging and sealing.

Consisting of two samplers for collecting loose and sticky forms of lunar regolith, two near-field cameras, as well as a packaging and sealing system, the "Surface Sampling and Packing System" has more than 400 components constructed in different materials which make the instruments light in weight but at the same time durable and strong enough to withstand the harsh space environment.

Yung said the process of developing the surface sampling and packing system was extremely difficult because deep space exploration was full of uncertainties.

There was a 1:1 model of Chang'e-5 lander-ascender vehicle in the team's laboratory, where, under Yung's leadership, the team has done more than 1,000 simulations.

Yung said the PolyU's research team was honored to fulfil the task of developing this key device. He said the country has trust in Hong Kong, so it has given us such an important task.

"I will review my experience in surface sampling and packing system, submit more proposals to the country, and strive to continue to play a role in the national deep space exploration program," he said.