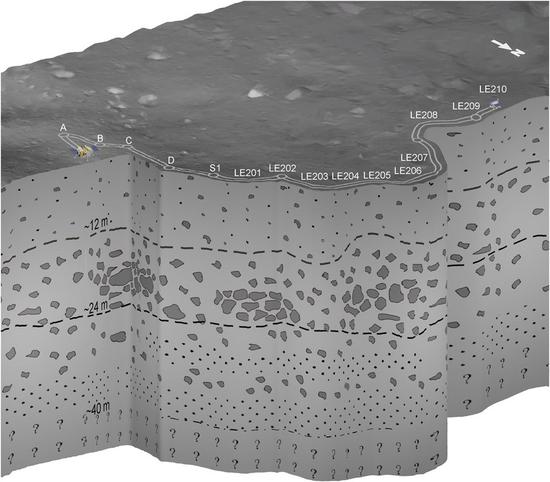 Schematic representation of the subsurface geological structure at the Chang'e-4 landing site. The subsurface can be divided into three units: Unit 1 (up to 12 m) consists of lunar regolith, unit 2 (depth range, 12 to 24 m) consists of coarser materials with embedded rocks, and unit 3 (depth range, 24 to 40 m) contains alternating layers of coarse and fine materials. (Photo provided to Xinhua)

China's Chang'e-4 probe has survived more than 600 Earth days on the far side of the moon while conducting scientific explorations.

With a variety of scientific gear on board, the Chinese lunar probe observed and measured the exotic land, offering unprecedented views and understanding of the far side of the moon and beyond.

As of last Wednesday, the lander and the rover of the Chang'e-4 probe have completed work for the 21st lunar day on the far side of the moon and is currently in dormant mode during the lunar night due to lack of solar power, according to the Lunar Exploration and Space Program Center of the China National Space Administration.

The rover Yutu-2, or Jade Rabbit-2, has far exceeded its three-month design lifespan, becoming the longest-working lunar rover on the moon.

With the help of data transmitted to Earth, Chinese researchers have made progress in vital research such as the moon's geological evolution, radiation and low-frequency radio environment.

With near-infrared spectrometer, panoramic camera, and lunar radar carried by Yutu-2, the rover peers beneath the surface of the mysterious lunar far side.

It is the first time to obtain the material composition of the moon's inner part through in-situ detection, which reveals the complex impact history of the far side of the moon, especially the South Pole-Aitken Basin.

It provides key evidence for the formation and evolution model of lunar soil, and an important reference for future landing at the South Pole as well as site selection for future exploration.

When an object impacts the moon's surface and forms a crater, the material thrown out by the impact is called the ejecta. According to data from the lunar radar and camera, the ejecta at the landing area of Chang'e-4 probe is 70 meters thick.

The researchers discerned three layers beneath the lunar probe's landing area. The top layer, which extends about 12 meters down, consists of fine-grained lunar soil. The second layer, which goes from about 12 meters to 24 meters deep, harbors coarser materials with embedded rocks. The third stratum, which goes down to at least 40 meters -- the radar couldn't reliably penetrate any deeper -- features alternating bands of coarse- and fine-grained material.

In a research paper published in Science Advances earlier this year, the researchers said that the use of Lunar Penetrating Radar "could greatly improve our understanding of the history of lunar impact and volcanism, and could shed new light on the comprehension of the geological evolution of the moon's far side."

The Chang'e-4 probe also provides a better understanding of the radiation environment on the moon. The surface of the moon is baldly exposed to cosmic rays and solar flares. When galactic cosmic rays collide with particles on the lunar surface, it will trigger reactions and release more radiation.

For the first time, the rover performed measurements of energetic neutral atoms on the lunar surface, providing a reference for the estimation of the lunar surface radiation hazards and the design of radiation protection for future lunar astronauts.

Radio communication systems haloed Earth with constant invisible flashes of radio waves. The signals blocked scientists from observing low-frequency radio waves that may help answer questions about the sun and the universe.

The low-frequency radio spectrometer on Chang'e-4 has acquired information about electromagnetic information below 40 MHz at the landing site which is of significance to the research of solar radio bursts at low frequency and the radio-quiet environment of the lunar far side.