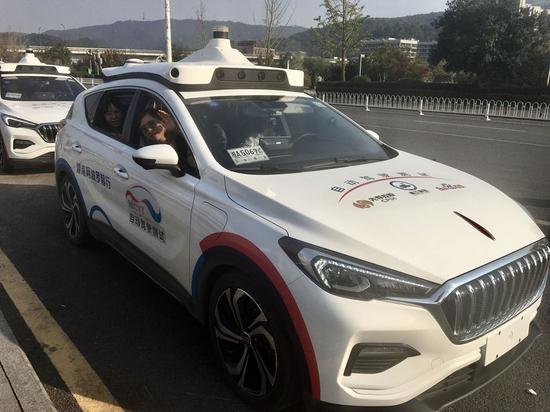 A Robotaxi runs on the road around the Meixi Lake International Culture and Arts Center in Changsha, capital of central China's Hunan Province, Nov. 12, 2019. (Xinhua/Su Xiaozhou)

Dodging jaywalkers, changing lanes to overtake other drivers, maintaining a safe trailing distance -- these are basic skills one must master before getting a driver's license.

Now imagine all these manoeuvres performed independently by a robot taxi on a busy, sometimes congested, Chinese road.

In a bustling city block in Changsha, capital of central China's Hunan Province, a fleet of white electric cars are putting these self-driving prospects into reality, navigating a busy traffic flow and attracting oohs and aahs from photo-taking passersby.

Co-produced by Chinese search provider and artificial intelligence (AI) heavyweight Baidu and Chinese carmaker FAW Hongqi, the 45 Robotaxis have begun test runs on 135 km of city roads since receiving approval from the government of Changsha on September 26.

Test rides on these robotic vehicles have offered a glimpse into the tantalizing future of smart, driverless traffic systems, which experts say are more effective and less prone to accidents.

The Robotaxi does not look much different than an ordinary SUV on the outside, other than cameras and radar lasers on the roof.

The 5-km drive on real roads around the Meixi Lake International Culture & Arts Center started after reporters tapped a screen to select a destination. The screen later displayed road conditions near the car, including the movements of cars and pedestrians.

The car then performed a series of near-flawless maneuvers from turning around to decelerating as a jaywalker crossed the street. In a real-life incident, there was a rear-end collision in front of the Robotaxi. It slowed down immediately, bypassing the accident at a safe distance.

The driver's seat is not exactly empty, but occupied by "safety personnel." Hu Bibo, one such "driver," with 10 years of driving experience, said he now has "limited functions."

With the throttle, brake, steering wheel and gear lever all managed by computers, Hu had the ability to move his hands and look around more during the test drive. "My main task is to deal with any unpredictable situations that the car may encounter," he said.

Changsha is among a number of Chinese cities actively exploring self-driving technologies with open road trials.

It is home to the National Intelligent Networked Automobile (Changsha) Test Zone, which since its establishment last year, has expanded its driverless trials from closed roads to open city roads.

So far, the zone has hosted over 1,800 tests on automatic vehicles from 38 companies, with a testing mileage of more than 60,000 kilometers. Industry heavyweights like Baidu, Alibaba, Tencent and JD.com have all tested their vehicles or key systems here.

To facilitate the test runs, smart facilities including high-definition cameras and smart sentry boxes have also been installed at 38 intersections on the test roads to provide more information for robotic drivers to make wise decisions, according to the city's traffic police.

Other cities including Beijing and Guangzhou are also holding pilot zones for self-driving technologies. In November, a fleet of 30 self-driving vehicles started carrying passengers in the economic development zone of Cangzhou, northern China's Hebei Province, in the first such pilot program to cover an entire city district. 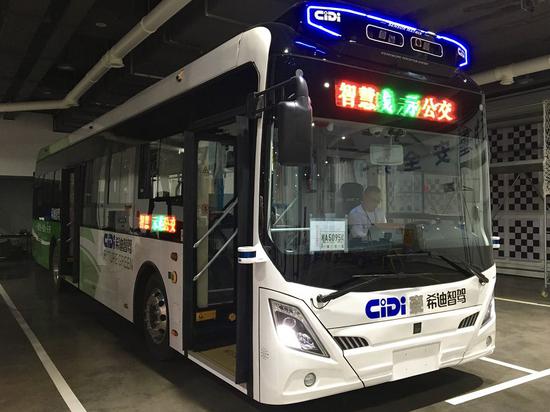 According to the Autonomous Vehicle Disengagement Reports 2018 issued by the California Department of Motor Vehicles, China's Baidu and Pony.ai were in the top 10 for most miles driven and least number of "disengagement events," which refer to instances when a human overrides the self-driving system to manually operate the vehicle.