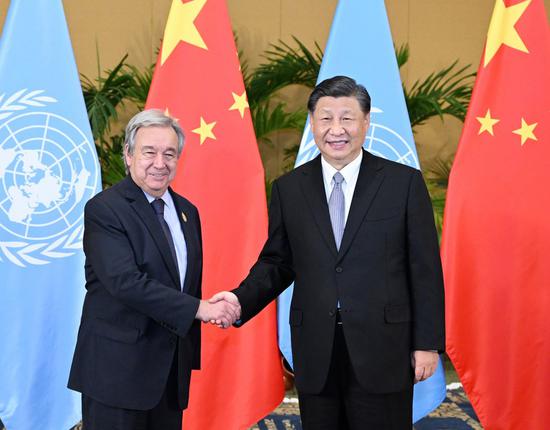 China is a staunch supporter of the international system with the United Nations (UN) at its core, Chinese President Xi Jinping said here Wednesday afternoon when meeting with UN Secretary-General Antonio Guterres.

Xi said that to achieve world peace, the purposes and principles of the UN Charter must be observed and the legitimate security concerns of all countries must be taken seriously.

China stands ready to strengthen cooperation with the UN, and jointly advance the Global Development Initiative and the Global Security Initiative to achieve tangible results, he noted.

For his part, Guterres once again congratulated Xi on his re-election as general secretary of the Central Committee of the Communist Party of China, saying that the UN highly appreciates China's commitment to multilateralism, and steadfastly supports the one-China principle, which is an untouchable red line that must be respected.