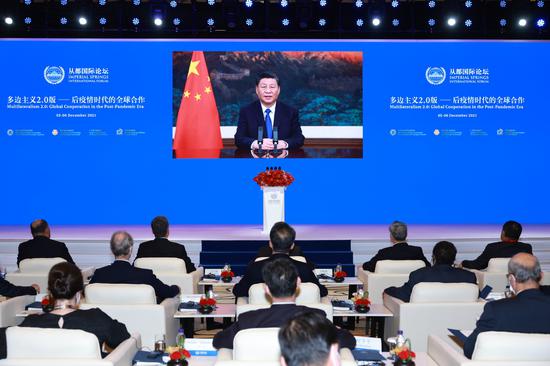 President Xi Jinping delivers a speech via video on Sunday at the opening ceremony of the 2021 Imperial Springs International Forum, held in Guangzhou, Guangdong province, with the theme "Multilateralism 2.0: Global Cooperation in the Post-Pandemic Era". (Photo/Xinhua)

He calls for sticking to openness, inclusiveness and collaboration

President Xi Jinping reiterated on Sunday that China remains committed to safeguarding multilateralism, saying the nation will firmly stand by the core values and basic principles of multilateralism, uphold fairness and justice and promote development through cooperation.

Xi delivered a speech via video at the opening ceremony of the 2021 Imperial Springs International Forum, which was held in Guangzhou, Guangdong province, with the theme "Multilateralism 2.0: Global Cooperation in the Post-Pandemic Era".

The forum, founded in 2014, has become a high-end platform for in-depth exchanges between China and the rest of the world.

Xi called for sticking to openness, inclusiveness, consultation and cooperation, upholding true multilateralism in response to the global challenges, such as the COVID-19 pandemic, the fragile economic recovery and climate change.

"Multilateralism is essentially about having international affairs managed by all parties through consultation and the future of the world decided by all countries working together," Xi said.

He underlined the importance of upholding the international system with the United Nations at the core, the international order underpinned by international law and the basic norms of international relations based on the purposes and principles of the UN Charter. He also called for promoting humanity's common values of peace, development, equity, justice, democracy and freedom.

"We need to focus on action and follow through the global cooperation agenda," Xi said. He expressed his hope that more countries will take an active part in the Global Development Initiative he proposed in September at the general debate of the 76th session of the UN General Assembly.

"It is important that we stay committed to development as a priority, advance cooperation on poverty alleviation, COVID response and vaccines, development financing, green transition and connectivity, and usher global development into a new stage of balanced, coordinated and inclusive growth," he said.

While reaffirming that China's determination to support multilateralism will not change, Xi said that the country will continue to contribute its wisdom and strength to the progress of human civilization.

More than 160 participants from the political, academic and business circles in over 30 countries, including former heads of state, former heads of government and leaders of international organizations, attended the forum either online or on-site.

Former UN secretary-general Ban Ki-moon said that multilateralism is the most important system and tool. "Under multilateralism, we can solve all the global crises."

Ban commended China's contributions to the world's fight against the pandemic, saying that the global community should further advance cooperation in fighting the pandemic and coping with climate change.

Vaira Vike-Freiberga, former president of Latvia, said that China has been exemplary in protecting its citizens amid the pandemic. "We have seen how China has been able to energetically contain the coronavirus with very strong measures."