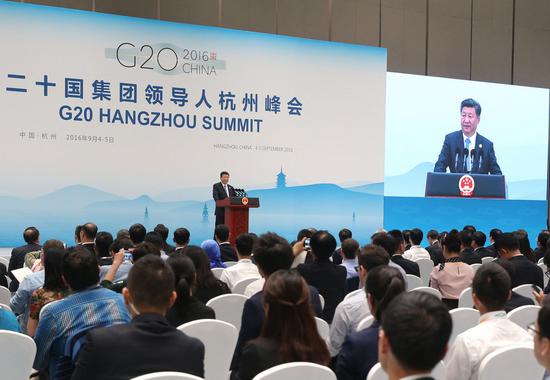 "We will work to ensure that growth and development benefit all countries and peoples and that the livelihood of all people, especially those in developing countries, will get better day by day," Xi said at the G20 Hangzhou summit.

Ruan said China's sense of responsibility as the largest developing country is clear for all to see.

Rather than being an onlooker and a passive follower, China chose to actively participate, promote and lead, said Zhang Lili, a professor with China Foreign Affairs University.

Zhang referred to the G20 Hangzhou summit as a milestone in China's participation in reforming the global governance system, noting that since the summit, China's efforts in this regard have become much more prominent.

For instance, China led the establishment of the Asian Infrastructure Investment Bank (AIIB). Over the last five years, the AIIB has invested roughly 22 billion U.S. dollars in 108 projects.

In the meantime, China has held high the banner of multilateralism. In many of his speeches, Xi has voiced China's resolve to counter unilateralism and protectionism, and help shape a fairer and more reasonable world order.

On Thursday, the 2021 China International Fair for Trade in Services kicked off in Beijing, attracting over 10,000 enterprises from 153 countries and regions. The COVID-19 pandemic did not stop the trend of cooperation and development.

China's stance has won the praise of many, including UN Secretary-General Antonio Guterres. Emphasizing that the goal of practicing multilateralism is building a community with a shared future for humankind, Guterres said China is now a significant advocate of multilateralism.

In fields such as responding to climate change and promoting green development, China made important contributions.

China has pushed for the issuance of the first Presidency Statement on Climate Change in the G20's history, advanced the building of a green BRI, and announced its plan to peak its carbon dioxide emissions by 2030 and achieve carbon neutrality by 2060, while helping other developing countries boost their capacity to address climate change.

With the spirit of cooperation and partnership as highlighted in the G20 Hangzhou summit, China stands ready to work even closer with other countries to build a brighter future for humanity.